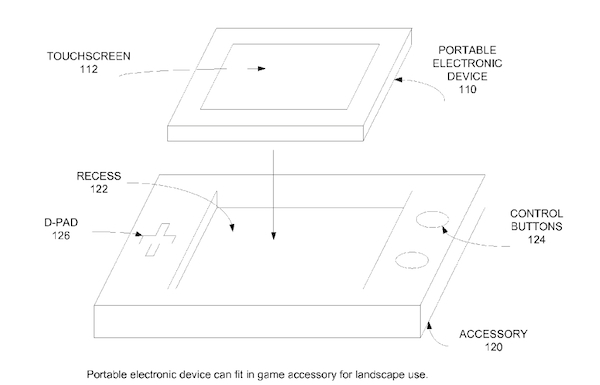 With all of the buzz around the iPad lately, it looks like another bit of Apple related news nearly flew under the radar.  According to recent patents submitted by Apple, it looks like they might be getting into the gaming industry in a big way.

Judging by the patents submitted, Apple wants to house their device (say an iPhone or iPad) into into an external embodiment that will transform it into a dedicated gaming device.  The patents show multiple variations of the suggested gaming accessory, some of which look awfully familiar to Sony’s PSP & the Nintendo DS handheld gaming devices.  The patents also show alternative variations of the gaming accessory that can include a camera, vibration, microphone, and an accelerometer.

One of the more interesting items for the gaming accessory is using external devices, such as your TV & home audio system, wirelessly via Bluetooth, Wi-Fi, or another proprietary wireless technology.  The device will then be able to either completely transfer both video & audio to the external devices, or become an accessory to those devices by displaying information relevant to the game (i.e. a map).  This idea can be rather interesting as not only would you be able to play games on the go, but you’ll also be able to play the same games wirelessly on your home theater, making it a true handheld gaming console.

If you’re the kind of person who enjoys snuggling up a good patent, then by all means, click the link below to get the full patent.  There’s way more in there that I could possibly highlight in this post, so by all means, go for it!

Now, if this isn't dedication to a brand, we don't know what is. There's this dude out in New York...