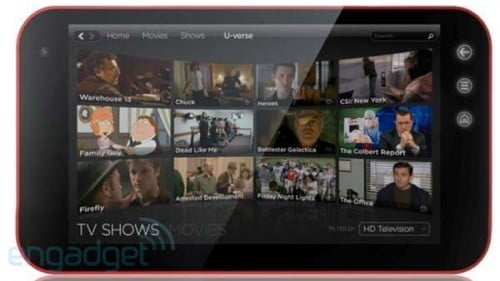 Dell has just been leaking the shit out of everything Android they plan to do in the near future. After all of the new smartphones we showed you yesterday, here comes the Looking Glass, an Android-based tablet.

The Looking Glass has one of the many things in common with most upcoming Android tablets set to hit this year: Nvidia’s Tegra 2. We knew that the Streak would have some siblings at some point, but we had no idea that it would be this soon! The Looking Glass is only two inches bigger than the Streak, but it actually looks like a tablet, and not a really big phone. It’s running Android 2.1, presumably with the same customized UI, named Stage, that we’ve seen running on the Streak as well.

As far as the specs of the Looking Glass goes, expect to see this 7-incher to have 800 x 480 resolution, which we’d like to see something a little higher, since it’s the same resolution as it’s little brother. Other features include a 1.3 megapixel camera, WiFi b/g/n support, 4GB DDR2 RAM, as well as 4GB of Nand flash memory, an SD card slot that’s expandable up to 32GB, Bluetooth 3.0, and a 3G modem.  The 3G modem is one of those AT&T-compatible jobbies that will ensure you always have internet connectivity on the nation’s fastest data network.  Add in a 2100 mAh battery, and it’s clear that Dell’s put together one hell of a tablet. Sure, it’s not Adam, or Gemini, but it will get the job done.

Dell has definitely got its hands full for the rest of the year, and into the next. Hopefully all of these devices will actually make it to market. At this point, I can’t wait to see anything from them, Aero notwithstanding. Expect to this the Looking Glass out sometime this Novemeber on AT&T.

Sprint Premier - Sprint's customer loyalty program provides users that spend the most, or have been with them long enough,...