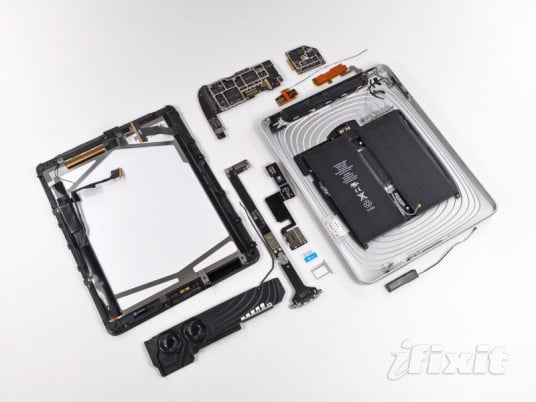 For those of you wondering how the iPad manages to lock onto AT&T’s wireless data network and GPS satellite signals despite its signal-blocking aluminum unibody casing, iFixIt’s new iPad 3G dissection sheds some light on just how Apple solves the “aluminum problem.” Turns out, the iPad 3G makes the most of its LCD frame by using it as a giant antenna. The black plastic insert near the top of the tablet also allows radio signals to pass through without being blocked by the aluminum shell, but that was already a given. Apple’s use of the LCD frame as an antenna is definitely more interesting. 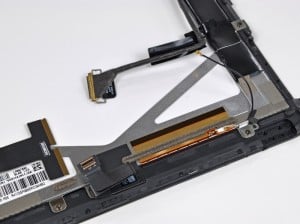 Aside from the obvious difference of the added 3G radio, the iPad 3G also boasts a GPS receiver. The iPad WiFi model does not have GPS functionality. What’s more, iFixIt’s iPad 3G teardown reveals that the tablet uses a GPS chipset that’s superior to the iPhone 3GS’s  GPS hardware. Gone is the 3GS’s Infineon Hammerhead II GPS chip, replaced by the iPad 3G’s Broadcom BCM4750UBG Single-Chip AGPS Solution. Chalk up a win for the iPad and Broadcom.

What’s most interesting with this teardown is that Apple is employing a fairly novel technique for making the most of the tight space within the iPad’s slim package. The iPad 3G has the same dimensions as its 3G-lacking sibling, but has to pack in more hardware. Rather than making more space for a dedicated radio antenna, Apple is using the LCD frame as a large antenna. Apple also used this technique in the new MacBook Pro, where the frame of the optical drive is used as a WiFi antenna. There’s also a radio antenna underneath the iPad’s black plastic insert.

So, the question is, does the reception from the LCD frame compare well with the iPhone 3G? If you have an iPad 3G and have noticed any differences in reception quality, let us know in the comments below!

It looks like ABC is preparing a version of its cool streaming video app for the iPad 3G, so you'll...