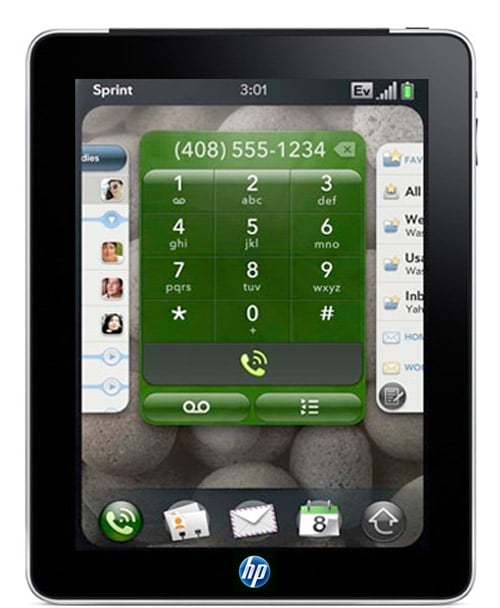 Palm may have failed to capture consumers’ attention with their webOS mobile before company resources started becoming scarce, but there’s no denying that twas touch-happy mobile operating system was the closest thing to an iPad killer available today. That is, until now. Rumors have Palm’s new parent company, HP, developing a tablet device – codenamed “Hurricane” – that runs on the same mobile operating system underpinning Palm Pre, Pre Plus, Pixi, and Pixi Plus!

Apple may have been without a serious iPad competitor since its launch early this year. To Apple’s benefit, Palm didn’t have the money to pursue a webOS-powered tablet. But, now that the company is flush in cash from HP, rumors indicate the two are working on a slate-style touchscreen device of their own. According to insiders “familiar with the matter,” HP has apparently resurrected e webOS-powered tablet project that Palm was forced to mothball when the company’s money well started to run dry.

The ball started rolling on the Hurricane project with the HP-Palm acquisition deal. When HP announced that it would gobble up Palm in whole to the tune of $1.2 billion, it did two things: it gave HP access to all of Palm’s intellectual property (patents and such) and it gave Palm the money it needed to have a fighting chance in the smartphone market. Rumors of some sort of mobile-focused tablet hint at the fruit of this new corporate marriage blooming early.

Palm was reportedly already hard at work on their own webOS tablet. HP recently canned their Windows 7 tablet, known as the Slate. Now, it seems that the two companies are using their once competing tablet projects to ward off the market share advances made by Apple. With their powers combined, Apple could have a serious iPad competitor looming on the horizon – the kind of competition that few Android tablets could hope to match in terms of the user experience.

The rumor is still unconfirmed, but we’re told that “Hurricane” launch goals are set for later this year. If things go according to plan, we could see the HP webOS tablet on market by Q3 2010.

So, then, the million (or more like multi-million) dollar question is this: would you buy a webOS tablet as an alternative to the iPad?