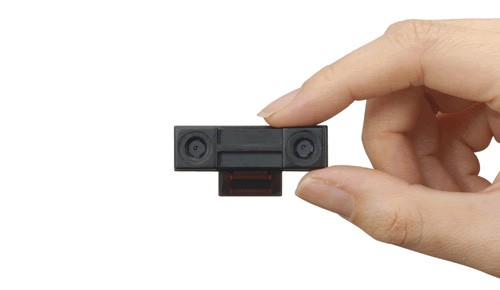 How about a 3D HD camera in your next mobile device? Sound like something you’d want to take advantage of? Sounds sweet to me (although, in all honesty I’d need to see the price tag associated with the overall package before I bought).

Sharp has just announced an industry-first. Something we’ll no doubt be seeing in the feature sets of the *cue grandiose voice with echo* ‘SMARTPHONES OF THE FUTURE!’. Their new camera module is not only compact enough to fit into one of your beloved devices, but it records at 720p AND 3D. Very nice. Not much is known about pricing and availability at this point, but it is said to be ‘sampling’ in July, with production ramping up before the end of 2010. Very cool.

I’ve got my cardboard red-and-blue 3D glasses nearby… Whenever you’re ready Sharp, send me a demo unit… and pack it into one of those next-gen iPhones if you could. That’d be great.

3D images are composed of two views taken using two cameras that simultaneously capture separate images for the right and left eyes. Consequently, a 3D camera requires peripheral circuitry to apply image processing to the two images, for example, to adjust color or to correct positioning between the images from the two cameras. Manufacturers have thus been pursuing designs that reduce the size and weight of 3D cameras and seeking ways to shorten their development period.

The current 3D camera module developed by Sharp incorporates functions to process the image data output by the left and right cameras, including Color Synchronizing Processing to adjust color and brightness, Timing Synchronizing Processing to synchronize the timing of the video signals, and Optical Axis Control Processing to correct positioning. In addition, Fast Readout Technology rapidly transfers video data from the image sensor, enabling 3D images to be captured in high-resolution HD mode. Further, in developing this camera module, Sharp applied high-density mounting technology nurtured over long years of experience in camera module development to achieve a compact form. Embedding this camera module in mobile devices such as digital cameras, mobile phones, and smartphones will contribute to the development of a wide range of new, innovative communications tools.

In the future, Sharp will be opening up new 3D markets based on 3D display technologies, including small/medium-size and large-size 3D LCDs, as well as on 3D input device technologies such as 3D camera modules.

The sexy follow-up device to the HTC Hero, the HTC Legend, is apparently making its way to Bell for those...