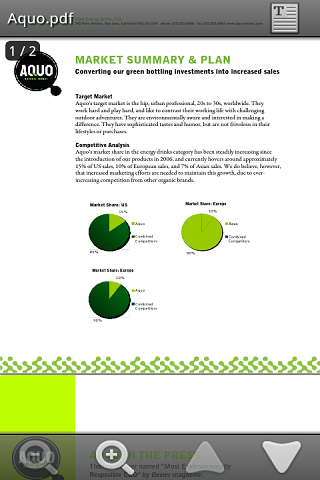 As we’ve seen before, Adobe Reader is only available for Android 2.1 and up. A search on my MyTouch 3G yielded no results, but both my Nexus One and EVO 4G both had Reader available to download. It should become less of an issue as many handsets that have been waiting for their respective update have begun to see the Android 2.1 OS update recently, but it still must be annoying to users on a lower firmware version.

According to the system requirements, the all Adobe Reader-compatible devices need to have at least a 550 MHz processor, and 256 MB of RAM available. Wah wah.

If you’ve got the horsepower, you can have access to PDF files from anywhere in the Android OS. Once you’ve download a PDF file, Adobe Reader will be ready to open the document. Multitouch has also been implemented in the form of pinch-to-zoom as well as flick-scrolling and panning around the page. Adobe also went a step further by adding a feature they call “reflow,” which is just fancy talk for automatically resizing text to adjust itself for smaller screens.

The information page says that Reader is supported on the Motorola Droid, Milestone, and Google Nexus One. But as long as the specs on your device are up to snuff, you should be fine. For some reason, some of the comments in the Android Market indicate that devices with the HTC Sense UI perform better.

The official app has a transition from portrait to landscape which is pretty much the same animation as the iPhone OS’, which is nice, but not needed. The official Reader app also has smoother zooming in and out. But other than that, they are pretty much just as functional as one another. One thing that I wish was available in the official Reader application that the EVO’s built-in PDF viewer has is the ability to search a document.

Twitter appears to be on a roll in terms of angering developers, as its official iPhone and Android clients are...