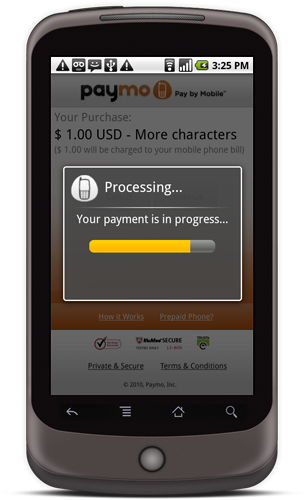 Boku is a mobile payment company that aims to make your Android in-app purchases easier than ever using your phone. By adding their payment platform to Android, using the new Paymo SDK, Android users can buy goods and services from within an app and charge it to the monthly phone bill. The San Francisco- based company has offices in Europe, Asia, and Latin America, and has a reach of 1.6 billion people today.

The Paymo pre-release Alpha SDK is available for developers who want Android users to have an alternative method of paying for their applications, besides the usual Google Checkout. All a developer needs to do is drop the Paymo code into the app, and they should be good to go. The service offers options such as 1-Tap mobile billing, and there’s no need to register or login when purchasing an application. No need for credit card information, all one needs to do is input their phone number, and the app will be charged to the customer’s monthly phone bill.

While T-Mobile offers users the option to add application charges to their monthly bills, the bigger, better phones on other carriers do not have this option. So, this should be quite appealing for people with a Droid Incredible, or upcoming Sprint EVO 4G. That isn’t to say Android users have no other options, as PayPal has launched their Mobile Payments library for Android developers as well. Leena over at Mobile Crunch makes a good point saying that all the competition can have its fun now, until Google implements their own in-app purchasing option for Android.

Previously, a company would launch an iPhone application, with no real plans for an app on the other, smaller app stores out there. Now it looks like companies are either launching just for Android (if the service is blocked by Apple), launch iPhone and Android applications simultaneously, or have the Android application follow shortly after the launch of the iPhone app. Android is being taken more seriously now, as many companies were taking the wait-and-see approach. As the platform is undeniably here to stay, Android may look appealing to those not looking sacrifice functionality by submitting it to the big A.

Smartphone apps usage on the up and up, iPhone users have most installed apps

Whether you're on BlackBerry, Android, iPhone, or some other smartphone platform, if you've got something to do, chances are, there's...