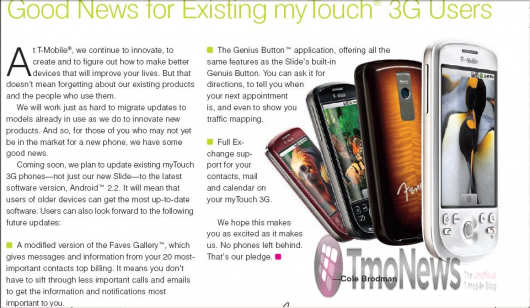 Similarly to the way the HTC Hero leapfrogged Android 1.6 and 2.0 to go straight to Android 2.2 OS, the MyTouch 3G will do the same. That means it will be skipping Android 2.0, and 2.1 OS, and will instead go straight to Android 2.2 OS. This is certainly exciting for MyTouch 3G owners, as their aging device hasn’t gotten much  love in the updates department recently. The JIT compiler will certainly give the MT3G a speed boost (though you shouldn’t expect Nexus One speeds). Still, many features in Froyo will likely be present. Let’s hope they don’t leave out the hotspot feature in the update.

Also included with the updated devices is the MyTouch Slide, of course. The device has been out barely a week, and T-Mobile is already talking updates to it. Good job, Magenta.

I’d expect the Slide’s update to come a little later, since HTC has to update their Sense UI to be compatible with Froyo. Only time will tell exactly what T-Mobile means by “Coming Soon,” but I imagine it’ll be sooner than later. Next month, latest I’m guessing. Let’s hope that’s not wishful thinking.

Who knows what features will make the cut in T-Mobile’s updates. The MyTouch 3G doesn’t sport a Cortex-A8 processor, so that means it won’t be able to run Flash content. Officially, at least. The original MyTouch, or the Slide will not be able to run Live Wallpapers, due to their lower-spec CPU’s. That’s no deal breaker in my book, live wallpapers are fun to play around with, but can kill battery, and there’s no real use for them. There will be a little give and take with the upcoming Froyo update for the devices, but doesn’t mean you should be any less excited!

MyTouch 3G users, what features from the Froyo update are you hoping will make the cut?