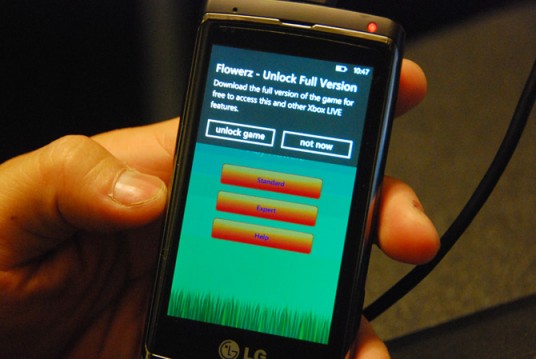 Although Windows Phone 7 will be lacking in copy and paste, they will have a few interesting features for developers at launch. In order to avoid a bunch of duplicate apps in their Marketplace, Microsoft is implementing at licensing API that allows developers to include free trial versions of their apps. I remember this used to be a big problem in the BlackBerry App World before they consolidated everything. iTunes seems to have gone the other way, providing clear filters for free and paid apps, although in-app purchases do allow some expandability. The nice thing about Windows Phone’s particular setup is that upgrading from a trial to a premium app doesn’t require any additional downloads – the full app is already installed, and the added functions go live as soon as the transaction is processed. Functionality and time are just some of the limits that can be placed on a trial version.

That sounds like some good flexibility for developers – I wonder if payment options will be equally helpful. Nobody has managed to successfully pull off the subscription method yet, which I think would earn Windows Phone 7 more than a few high-end apps. Windows Phone 7 is still being seeded with developers, but we should see supporting hardware in the market by Q4

Good news for those Android users who have been able to update to the Android 2.2 OS "Froyo", Adobe's Flash...