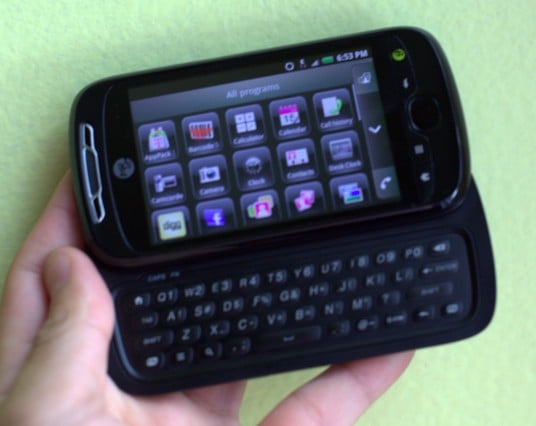 T-Mobile knows that the myTouch 3G Slide is not going to out-spec other flagship devices like the Droid Incredible on Verizon, EVO 4G on Sprint or the iPhone 4 on AT&T but it is hoping that the customized software tweaks and and overall ease of use will attract many first-time smartphone buyers. I’ve been using the handset as my primary phone for a while now and have been quietly impressed with a few of the elements but can it compare to some of the other high-end devices we’re seeing out there?

Read on after the jump for a full breakdown. 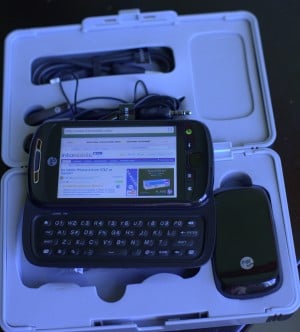 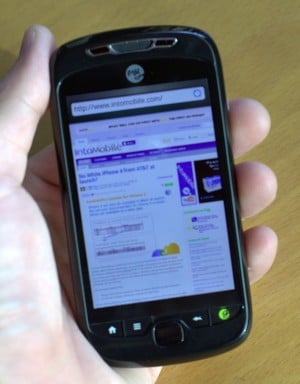 Not surprisingly, the myTouch 3G Slide looks like a myTouch 3G that has put on some weight. At 4.55″ x 2.37″ x .6″ the handset is bigger than the myTouch 3G in every way because it has to make room for a full, four-row QWERTY keyboard. While it’s not as light as its little brother, the Slide feels good in the hand and can easily fit into most pockets. The hard camera button is on the right spine and it works well and the solid volume rocker is on the left spine. The standard headphone jack is correctly place on the top while the microUSB port rests on the bottom.

The 3.5-inch screen takes up most of the device’s face and there are four hard buttons near the bottom of the screen. These include the home, menu, back and “Genius” button (more on that in the software section, as well as an optical trackpad for navigating. I didn’t like these elements at all. The responsiveness of the buttons felt off – I had to put more pressure on these than I felt was necessary – and the trackpad seems unnecessary with a full touch device.

The display is fine, but it’s tough to go nuts over something once you’ve seen the amazing displays on the EVO 4G, iPhone 4 or Samsung Galaxy S. If you don’t care about the competition, then the Slide’s screen will be more than adequate because it’s bright and responsive.

Of course, the main reason to get the myTouch Slide is for the full QWERTY keyboard. There are a few negatives but, overall, it’s an excellent way to bang out messages on the go. The shape of the keys are just right and the feedback and “clickability” make it easy to write long e-mails wherever you are. Hitting the secondary function or Caps lock key will bring up a handy light above the keyboard and I always appreciate dedicated comma and period buttons. There’s also pretty good auto-correction software with the keyboard so you don’t have to worry about throwing in apostrophes. The sliding mechanism produces a satisfying sound and it feels like it will hold up over time.

On the downside, I found the Tab button and A a little too close together and this led to multiple frustrating typos. What’s even worse is that the top row doubles as the number keys. This happens on many keyboards but usually you’ll have the letters and numbers a different color or font size to help you quickly find what you’re looking for. The myTouch Slide has “T5” “Y6” “I8” and others the exact same color and size, which can take some time to get used to. None of these quibbles are deal breakers though, as I was quickly able to get up to speed with my typing.

The back cover is made of plastic and it feels a bit cheap. It’s easy to take off though, and I absolutely love that you can access the microSD slot without having to remove the battery. Overall, the handset feels like the mid-range device it is: it will be able to stand up to a pounding but it’s not going to appeal much to your inner gadget lusting. 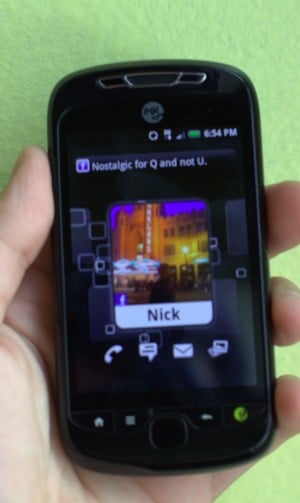 The myTouch Slide rocks Android 2.1 (Eclair) with some of HTC’s Sense UI thrown on top, as well as a dash of customized T-Mobile software. For the most part, the interface is well-done, the tweaks are handy and the handset is a capable device but there is far too much sluggishness for my liking. Maybe it’s the pokey processor (same as in the Legend [Thanks, Blake]) or the software layer on top of Android but it takes too long for some apps to come up.

The Android heart means you can make calls, browse the web, send and receive e-mails, check your Facebook and download new apps on the go. While Android apps still lack the overall polish of iPhone counterparts (don’t fight me on this one fanboys, you know it’s still true), the platform is quickly maturing and the Android Market is now filled with more than 50,000 programs. It’s an operating system that is pretty darn cloud-friendly, as you’ll be able to easily sync multiple web and corporate e-mail accounts, as well as calendar and contacts.

You can also be sure that the platform will be going strong, as Google already showed off more features with Android 2.2. It’s unclear when this handset will get the latest version of Android though, as the customized software always leads to update delays.

I really enjoyed many of the software modifications T-Mobile added because these are simple, yet pretty powerful. For example, when you use the window-shade-like pull down bar for notifications, the myTouch Slide also includes the last few apps you’ve used in that window. Sure, you could just hold down the home button to bring up the native app switcher, but this makes it easier to check a notification and then hop back into the app you were using. I would have loved if you could kill apps from this menu, but the switching is pretty fine and dandy.

Another tweak allows you to quickly switch the profile of the device for work or play. This is well-done but I still question the real usefulness of it – Nokia’s been doing this for years but I just want my handset to be capable of both, I don’t need to change the face that often. Maybe it’s a sad reflection of my work/life balance, but I didn’t find this mode switcher very useful. You may, though.

The Genius button is another tweak that takes a little while to get used to. The button is where you’d expect the search button to be on an Android phone – this really annoyed me when I first had it because I’ve been conditioned to use this button for lots of things. Instead, the Genius button and software gives you voice-activated control over your phone – think of it like Google Voice search on steroids. This can include searching the device, finding local restaurants, voice dialing and more. The voice dictation works pretty well and I found myself using it a lot more than I thought I would.

It also has preloaded software like HTC’s Peep Twitter client, but I prefer the official Twitter for Android. I also despise the software keyboard – it’s cramped, there’s a nasty default clicking sound, and the auto-correcting software is somehow way worse than with the physical keyboard. Luckily, you can turn on Swype and this makes the virtual keyboard somewhat bearable.

Overall though, the Slide’s software works fairly well – with a few annoying delays – and you can be sure that Android will only get better in the future. 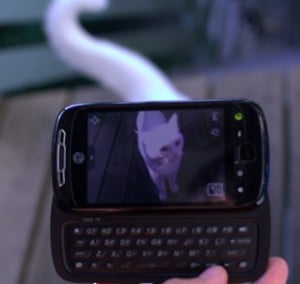 Browser
The Slide uses your typical Webkit-based browser that comes with Android and you should have no trouble surfing most of your favorite sites. We’ll have to wait until it gets Froyo for full Flash 10.1 support but you may not care too much about that yet. Most pages rendered well – even with strong JavaScript – and, of course, IntoMobile looks great on the device.

Multimedia
Like nearly every Android device, the Slide is just a decent multimedia machine. This utilizes HTC’s music and video software, so it will look nicer than the stock version of the little green robot, but it’s not quite as good as the iPhone. Still, you’ll be able to play most of your files and it comes with Amazon’s MP3 store for over-the-air downloads. Google has shown off some neat multimedia capabilities that will be coming to Android in the future (you’ll be able to freaking stream your home collection soon!), so this will soon be able to go toe-to-toe with the iPhone.

The Slide can also play multiple video formats but the only-average screen kind of makes this a disappointing experience. I was coming from using the huge, nice screen on the EVO 4G, so my perspective may be skewed.

At 5-megapixels, the Slide has a decent shooter but the sluggishness of the device killed many of my magic moments. There’s a wicked slow shutter lag and trying to take rapid shots can be a pain. Like most cell phone cameras, it doesn’t handle low-light that well and you can forget most action shots too. To be fair, there’s a good touch-to-focus feature and it’s a breeze to upload shots to Facebook, Picasa, Flickr and other online services. It’s not going to replace your basic point-and-shoot but you could do a lot worse than the Slide’s camera. The video recording wasn’t great (as you can see from the embedded clip below, but it will do in a pinch. 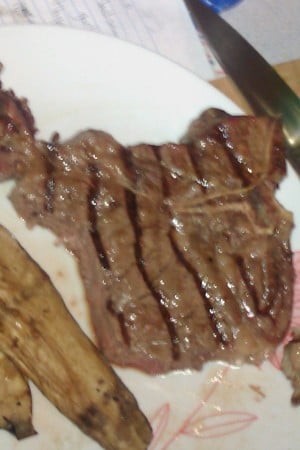 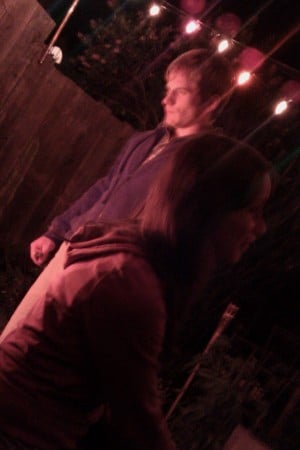 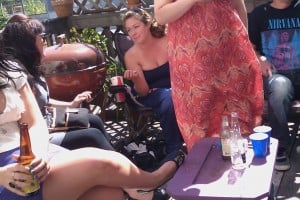 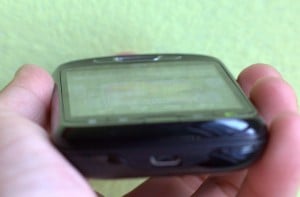 I’ve seen some other reviews out there complain about the volume on calls with the myTouch Slide but I had no complaints with it. Calls were pretty crisp and those on the other end knew I was on a cell phone but said the overall quality was good. The handset easily paired up to multiple Bluetooth headsets and the speakerphone was decent but don’t expect to be holding any high-powered business meetings using that.

Coverage and data reception were definitely mixed. I had no problems making or receiving calls but I would routinely dip down to EDGE speeds while sitting at my desk. It would then toggle back to 3G but the actual download speeds would vary wildly. I didn’t have this problem with the Cliq XT (also on T-Mobile), so you can draw your own conclusions from that.

The battery life was pretty good, as I was able to get through a full day on a single charge. That may not be as good as your RAZR from 2002 but it’s about all you can expect from a data-intensive device like this and it was a godsend after suffering with the power hog that is the EVO 4G. 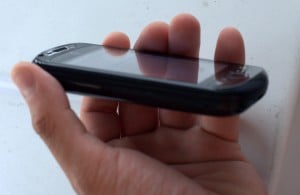 The final take: Should you buy the myTouch 3G Slide?

The Slide is a pretty good mid-range Android handset that beats the tar out of devices like the Motorola Devour, Cliq XT and the Motorola Backflip and it should make a lot of first-time smartphone buyers happy. The problem is that T-Mobile is positioning this as a flagship device, which puts it in direct competition with the Droid Incredible, EVO 4G and iPhone 4. It does not stack up well against those handsets.

That’s why I have a hard time recommending this device despite the useful software tweaks and the comfortable full QWERTY keyboard. It probably won’t even be the best Android handset on T-Mobile, as the Samsung Galaxy S is expected to land on the carrier very soon.

Give us your thoughts on the Slide in the comments.

By now, most of you iPhone fans out there are probably champing at the bit for your chance to preorder...