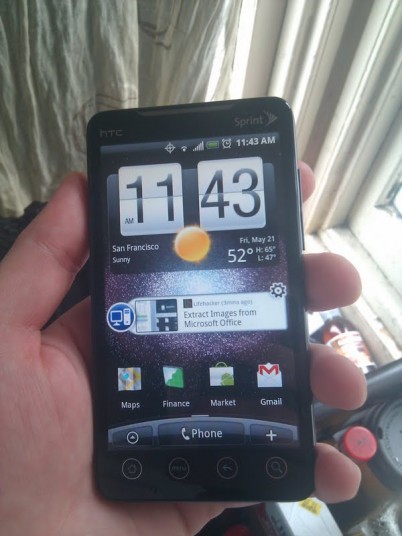 A Sprint employee who had leaked Sprint’s HTC EVO 4G sales numbers on the XDA-Developers forum was fired when the company got word of the matter. An internal investigation followed the sales figure leak, and the employee behind the incident is probably regretting what was initially assumed to be fake to begin with.

The number of Sprint HTC EVO 4G units sold in the first two days? 66,483. That’s a pretty small number, seeing as how Sprint initially touted sales of the smartphone as “record-breaking” and caused all sales channels to sell out of stock. The sales record statement later retracted by the carrier, saying that they were “on par” with both the Samsung Instinct, and Palm Pre combined, not instead of two times greater than that.

Still, the 66,483 EVO 4G handsets sold were likely only from Sprint stores, and not from Wal*Mart, Radio Shack or Best Buy, which is where you went if you didn’t want to pay a mail in rebate. It’d be easy to see why Sprint sought out, and fired the employee, as the numbers aren’t necessarily flattering, and it’s hard to imagine that a relatively small number of EVO activations crashed the company’s computer system during the EVO’s launch weekend.

Sprint tracked down the employee to a store in Florida, and sent a task force member from Kansas to personally kick the guy out. Glad they handled the matter with such grace. It also doesn’t help that many Sprint stores are still dry of HTC EVO 4G inventory, giving a potential customer a little more time to think if they want to go grab one when available, or something that the know will be in stock right now.

Well, we suppose the easiest thing to say to the employee who leaked the numbers is “be careful who you leak your information to, and make sure they’ll protect your anonymity.” But you’ve got to wonder how Big Yellow would have reacted if the number of EVOs sold was a much, much higher number.

Do you think they would have gone to such great lengths to investigate the leak if they had sold 250,ooo Sprint HTC EVO 4G units?