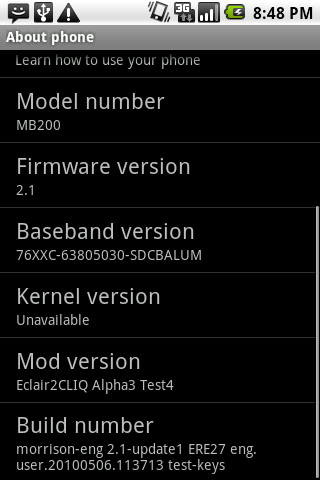 If you have a T-Mobile Motorola CLIQ in your pocket, you might be a little upset to see many other Android devices getting much-needed updates to Android 2.1 OS when you’re still stuck using the Android 1.5 OS. Luckily, your wait is now over to experience Android 2.1 (Eclair) on your CLIQ.

A handful of great developers have built a CLIQ-specific Android 2.1 ROM from Android Open Source Project, giving the Motorola CLIQ a much-needed face lift in the operating-system-that-runs-the-phone department. This particular build of Android 2.1 is still in Alpha stage development, but it’s functional enough to try out, if you have the time. You can thank travisjames, barakinflorida, otabbb for the functional build. They are working hard to get all the kinks out, giving the user a fully stable, fully functional ROM for you CLIQ users to play with.

With the exception of upcoming Motorola devices, we have yet to see any Motoblur devices upgraded to Android 2.1 OS “Eclair,” although we may not have to wait too much longer to be see updates coming down the pipes. The Motorola CLIQ was launched on T-Mobile days before the Motorola Droid, but has so far only received minor upgrades. Those updates may have helped in certain areas, but they were nothing like a full OS upgrade.

This CLIQ Android 2.1 build is not a Motoblur ROM, therefore you won’t be able to access any of the custom-made widgets you may be used to using. But, since Motoblur is pretty horrible, we don’t think many people will mind. We gotta hand it to the devs who have put this together, as it’s more than Motorola has released for the device, Motoblur or not.

From what I’ve learned from using Alpha ROMs it’s better to wait for a more stable build to be released than to jump right in and flash the an Alpha build onto your primary handset. Not because the Alpha is unusable, but because the development of said ROMs are being worked on rapidly, and you could see more than one release in a day to fix bugs and whatnot. I’d suggest giving it a week or two, since there will probably be multiple releases in that time. That way you’ll get a better feature set, more optimization, and an over all better experience in an Alpha 12 than an Alpha 4 (obviously). The real question is will anyone will actually miss Motoblur on their CLIQ?

If you’ve got a Motorola CLIQ or a Dext, head on over here to learn more about the project. Happy flashing!

The wonderful mind behind the Spirit Jailbreak has been working hard to get Flash on the iPhone, and have some...