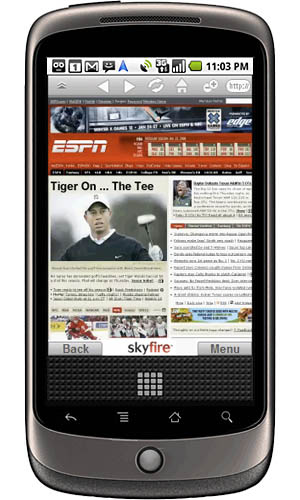 Skyfire has been on a roll lately, and with their newest update for the Android platform, it doesn’t look like they will be slowing down anytime soon. The updated version of the Browser (2.1) has some nice improvements, but the real story is how they are taking on Flash.

With Flash, Adobe is not being lazy, as said by certain people. They have been working very hard on getting Flash to work for mobile devices, and they are doing alright for themselves, but they are running around like mad men. Adobe is begging companies to use their protocol to ensure that their videos can be optimized for mobile devices. That simply will not be the case for every website on the planet that has Flash on its site. There are too many websites out there that do whatever they want, and if one method works for them , they’ll probably stick with it. If companies were to listen to Adobe to the fullest, they’d have to re-write their whole site, and have multiple files to support multiple devices. So, no, Adobe is not being lazy, but it may be a little hard to get people to listen to them.

Skyfire, on the other hand, is side-stepping the whole thing. It doesn’t matter what kind of video it is, the content is sent to their servers and is spat out in the form of HTML5 in seconds. Skyfire is in a very good position right now, especially if the native Flash Player doesn’t go over too well for Adobe. Skyfire has more saturation in the market, being available for Windows Mobile and Symbian for some time now. Skyfire may be helping Apple prove their point in a way, and soon, the company will submit their browser to the App Store. If it’s not blocked for some really lame reason, Skyfire should be a huge hit for the iPhone. But that potential success would possibly make Apple think twice about approving the browser to begin with.

I got a chance to talk to the CEO of Skyfire, Jeff Glueck, and he’s definitely optimistic about the rate of Skyfire adoption they’ve seen. He explained that HTML5 is also in a precarious situation as well. “HTML5 is a goal, but as of right now, it has no standards.” Whether its H.264 or http streaming, different companies want different things out of HTML5, and if it doesn’t get some sort of solid standards, it could get as messy as the position Adobe is in right now. But instead of plowing through it head-on, Skyfire is just a big work around. A work around that works beautifully, and the company has 9 patents on this as well.

The company is (obviously) very focused on Android and the iOS. Though it’s yet to be submitted to Apple App Store, the company remains “humble,  and quietly optimistic for approval.” Since Apple had approved other browsers into their App Store, and Skyfire plays back HTML5, they’ve got a good enough reason to be optimistic. The company currently has no plans for a Windows Phone 7 release, and is taking the ‘wait and see’ approach, and who can blame them?

I was a bit skeptical, initially. But after getting to play around with the new Skyfire update, I’m very pleased with it. The multitouch capabilities have improved a lot, though they may not be as smooth as what you’d see on the stock Android browser, but it’s damn close. Overall, I’ll keep Skyfire installed from now on, but I’m not yet willing to give up the stock Android browser. If you are looking for a browser alternative for Android, Skyfire is definitely the way to go.

Get Skyfire now from your Android phone!