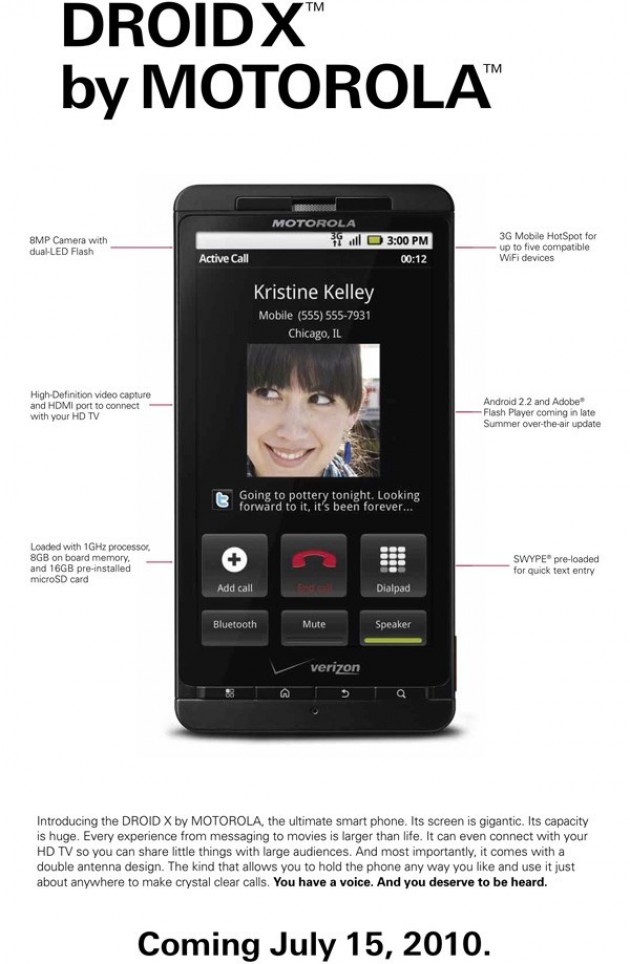 In the midst of the new iPhone 4 and Apple getting ridiculed for a handful of issues, namely the “Death Grip,” Motorola decided to take out a full page ad on the New York Times today. It’s a simple, lame potshot, but damn if it’s not appropriate.

The ad showcases many of the Droid X’s features, but the ad has a few choice words at the bottom. The one to cause a stir simply states (emphasis ours):

[The Motorola Droid X] comes with a double antenna design. The kind that allows you to hold the phone any way you like and use it just about anywhere to make crystal clear calls.

Shazam! Ok, it’s not the best of ways to throw negative comments at the leading smartphone in the world, but the ad certainly makes its point. And Motorola wasn’t the first to take a jab at the iPhone 4, either.

Still, Jobs’ inability to put together a consumer-friendly response – flatly saying that there is no antenna reception issue – doesn’t mean there isn’t some truth behind his words. There’s talk that an iOS 4 update/software fix will allow the new iPhone 4 to reflect signal quality more accurately. On the other hand, when you add in the Retina Display issues, along with the proximity sensor problems, it’s clear that Steve Jobs has a big problem in his hands. The latter two likely won’t be fixed by a software update, either.

Motorola saw this as an opportunity, and took it. That’s the biz, and you can’t say Apple hasn’t done it’s fair share of mud-slinging, what with their “I’m a Mac” TV ads. Interestingly enough, Professor Gert Frølund Pedersen, an antenna expert over at Denmark’s Aalborg University predicted the new, shiny iPhone 4 would experience such issues about two weeks before the device hit the shelves. And if there’s no reception issue, why is Apple now trying to hire Antenna Engineers? For the iPhone 5? We think not. Hell, even CNBC used the word “lemon” when describing the new device.

In the end, though, it’s very hard to argue with the number of units sold in just three days. We’ll see what Apple will actually do about this issue. What won’t be happening, however, is “free bumpers for everyone!”

Motorola, thanks, this was a good laugh. Now hurry up and give us a 2Ghz Android phone!