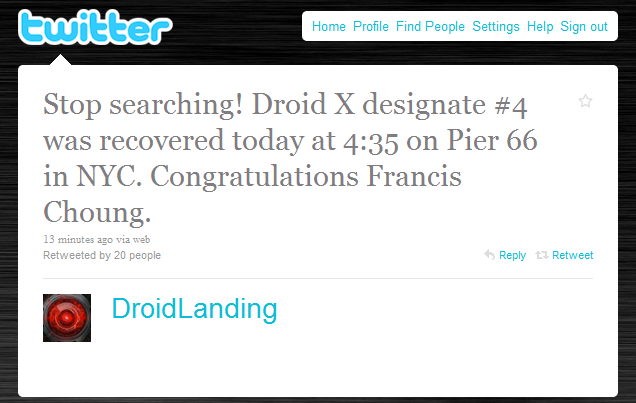 The Motorola Droid X scavenger hunt just got a lot more interesting. The @DroidLanding Twitter account just released the exact coordinates to where you can find the hidden Droid X for New York City!

Now, before you jump out of your seat, don’t expect to actually find one of the hidden Verizon Motorola Droid X units lying around, instead you’ll find a certificate that will allow you to redeem one. While it’s not as exciting as being able to find it, go to Verizon and activate it that day, a voucher for a free Motorola Droid X is good enough in our books. The Twitter account tweeted the coordinates, which leads you to Pier 66. Francis Choung was the one to find the first hidden Droid X certificate, and more will follow.

It seems that Verizon has hidden a total of 21 hidden certificates through out the country, and the rest of the coordinates should be dropped sometime soon. According to AndroidAndMe, the X certificates can be found in the following cities:

Now that one has been found, the next coordinates should be released sometime soon.  Is there a Motorola Droid X hiding in your city? If yes, check out the Twitter account for more clues as to where it may be hiding. Even if you have a good hunch as to where the certificate may be hiding, I wouldn’t go search right now. According to the official rules, “the final clue of each GPS location for each Certificate will be tweeted at the time it is hidden.” So you may have to wait until the certificate is actually dropped into place before you can find one. If you do have a hunch, it probably wouldn’t hurt to be in that place when Droid Landing tweets the coordinates.

Just leave the one in San Francisco to me, please?

Apple can't seem to manufacture iPhone 4 units as fast as customers want to buy them. While this is generally...