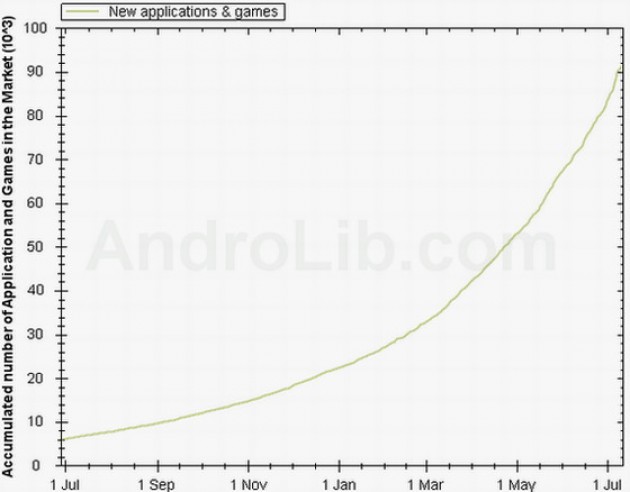 We know that the Android Market has been growing rapidly, and in more ways than one. Last we heard, the Android Market had a cool 70,000 Android apps available, and now we’re hearing that it may have up to 90,000 at the moment. If this turns out to be true, we may see the Market hitting the 100,000 app mark before the end of July.

At the Droid X launch, Eric Schmidt and friends announced that the Android Market now has 70,000 applications. So how could the Market have undergone growth of 20,000 applications in such a short amount of time? It likely didn’t, but it is hard to argue with AndroLib.com‘s numbers, which show just this. The site tracks the number of total apps, and new apps and games that come in each month from several different markets around the world. So collectively, The Android Market may have about 90,000 apps, but some may be only available in certain countries, hence why we in the US see lower app counts in the Market.

Back in March, the Market saw the biggest jump in the number of new apps released, and that trend has not waned since. At the time, the Android Market held almost 28,000 applications – it’s hard to image that there were so few apps so recently. The month of June saw 15,288 new applications, and so far, July has seen 9,129 news applications and games, and we’re still have yet to hit the 2 week mark of the month.

But, wait, there’s one more piece to the pie that could help the Android Market meet and exceed the 100,000 app mark relatively soon.

Google’s App Inventor could the beginning of something brilliant. Or horrible. The idea of letting 12 year-old girls making Hannah Montana applications that do little more than give you a slide show of pictures is kind of sickening. But, this will make it so much easier for a company who’d like to get an application out in the Market, yet don’t want to, or can’t afford to hire a developer to do so. Whatever you might have to say about the App Inventor – it will certainly have its drawbacks – it’s still genius.