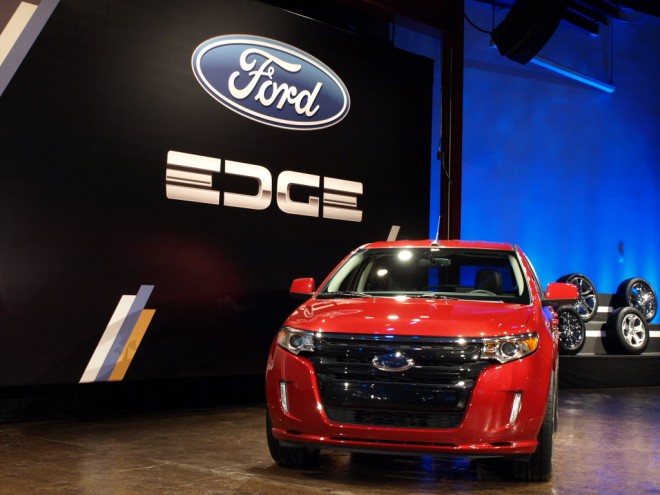 When it comes to mobile technology, most automakers seem to have little more than a casual guess as to how to integrate mobile phones and their wireless connections into cars. That’s where Ford and the MyFord Touch-enabled 2011 Ford Edge comes in to show the relatively stagnant automotive industry that high-end mobile car tech should not only be easy to use, but also accessible to the masses. MyFord Touch works with your mobile phone’s cellular voice connection to pull down information; uses Bluetooth to make phone calls and play music; and is even capable of turning your car into a rolling WiFi hotspot. Ford is tackling the tough task of tying mobile tech and wireless data connections into their cellular-enabled 2011 Edge.

I had the pleasure to give the new 2011 Ford Edge a good lashing through the rolling hills and swooping twisties of Tennessee. And, while I could go on and on about the 2011 Edge’s more refined handling compared to the outgoing 2010 Edge, additional horses under the hood, attention-grabbing 22-inch wheels and improved material and build quality, I’ll restrain myself and focus on the mobile tech that really defines the new Edge. 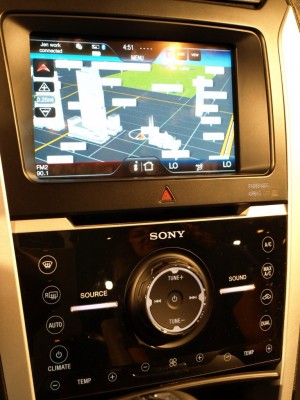 Getting touchy-feely with MyFord Touch
Ford has outfitted the Edge with its MyFord Touch system, which is basically your dash-mounted media hub that seamlessly ties together your vehicle controls, navigation, mobile phone, and music player. The refreshed Edge brings with it something totally new for Ford – the new MyFord Touch in-car multimedia hub. It’s festooned with an 8-inch dash-mounted touchscreen, dual 4.2-inch reconfigurable displays in the instrument cluster, two USB ports underneath the arm rest, an SD card slot, RCA inputs, Bluetooth support (for audio, phonebook, phone calls, wireless data tethering, and SYNC connectivity), and enough charging ports to keep all your gadgets juiced and ready to go. Every trim level comes with the 8-inch touchscreen, but the GPS navigation maps from Telenav and Sony audio system are only standard on the Sport model.

Assuming you’ve already paired your phone with the MyFord Touch system, getting connected to you car is as simple as opening the door and stepping inside. The car will automatically pair with your phone and sync with its phonebook. You can also set the system to stream music from your mobile phone over Bluetooth. Or, you can simply plug a USB flash drive loaded with MP3s into one of the under-armrest USB ports or connect your media player via RCA cables. I found it easiest to connect my iPhone to handle all media playback, phone calls, and data services via Bluetooth. I decided to charge my iPhone via the cigarette lighter underneath the center stack, but I could have also charged via the USB port underneath the armrest. 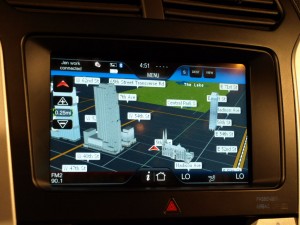 Keep in mind, though, that even without the full onboard GPS maps, Ford’s SYNC technology uses your phone’s cellular voice connection to provide your MyFord Touch with turn-by-turn voice directions to your destination. What’s important here is that Ford is making this level of mobile technology accessible to even base model 2011 Edge buyers.

Without the SD card, you’ll be limited to getting turn-by-turn voice directions through Ford’s SYNC service. Once connected to your phone over Bluetooth, SYNC is capable of getting driving directions and points of interest by using your phone as an old-school modem. The system gets data through a voice call, much like a telephone modem did back in the 90’s. Ford could have opted to go use a smartphone’s data plan, but not everyone has a smartphone or a data plan, and the idea behind SYNC and MyFord Touch is to bring this tech to the masses. I say, “well done.”

If you check the option box next to “GPS Navigation,” you’ll have access to all of Telenav’s renowned map data. And with that map data, you can use MyFord Touch to route you to your destination with visual turn-by-turn directions. And, since this is Telenav map data, the maps display 3D images of buildings and landmarks to help you find your way. 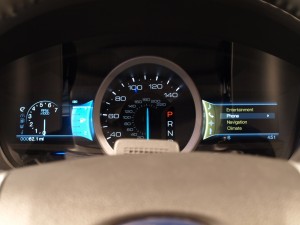 Voice control
The entire system can be controlled through the touchscreen or via voice. Touch any of the four corners of the screen, and it’ll shortcut you to either the Audio, Phone, Navigation, or Climate control panel. The voice recognition technology is powered by Nuance, the same people that have been bringing us speech recognition solutions in the smartphone space for years. Needless to say, voice recognition is not half bad. It could be better, but with over 10,000 first-level commands, you’ll probably be impressed.

And, for the sake of safety, the Nuance-powered text-to-speech and voice recognition engines will read aloud your SMS text messages and allow you to respond via voice to text messages. You can’t dictate responses, but you can reply with customized canned responses.

The voice control system also allows you to enter one-shot destinations, so you don’t have to enter the city name, street, and house number separately. This might sound like a simple feature, but it makes a huge difference when you’re trying to enter a new address. 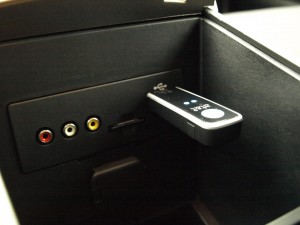 WiFi hotspot
Wait, what? WiFi hotspot? Yep, thanks to the aforementioned USB ports, you can plug a 3G USB data card into the MyFord Touch system and turn the entire car into one giant WiFi hotspot. Sure, there are smartphones out there right now that can turn themselves into a portable 3G hotspot with a push of a button, and there are in-car systems that will endow your car with wireless data, but what do you do if you already have a USB data card? Ford says the idea here is to allow existing users to simply bring their existing USB data cards and fire up the WiFi hotspot.

The alternative for those of you with compatible phones is to connect (or tether) your smartphone to the car via Bluetooth and use the data connection to power the WiFi hotspot feature. You’ll be limited to Bluetooth data speeds this way, but it’s a convenient option to have.

I like the idea, and it should prove to be a great feature on long road trips. Or, if you’re planning a caravan, make sure you have a 2011 Ford Edge in the group. Having a rolling WiFi hotspot in your caravan is the only way to roll.

For now, only GSM data cards are supported (like AT&T), but Ford will update the system to handle CDMA carriers in the near future.

Too high-tech for the masses?
Hell no. This is exactly the kind of marriage between mobile tech and car tech that I’ve been waiting for. Hopefully, Ford’s push to bring all this tech to the entry-level will force other carmakers to really up their game.

Navigating the touchscreen is simple enough. The four “hot corners” are always available to whisk you away to a different panel that controls Audio, Phone, Navigation, or Climate. Or, there’s also the voice control interface, if you’re more the keep-hands-on-wheel type. And, because you can use your non-smartphone for everything from making calls to playing music to finding directions, the MyFord Touch system is as welcoming to the masses as we could hope for.

I’m still appalled that most automaker have yet to figure out how to leverage 3G or 4G wireless data connections and smartphones to turn a car into a rolling, always-connected infotainment system. Cars should now be capable of updating you on the weather, reading your email, and helping you out with text messages. Ford seems to be intent on making this kind of technology accessible. I’m looking forward to see what Ford is planning next!

Stop me if you've heard this one before, but Google Goggles will soon be coming to the Apple iPhone. The...