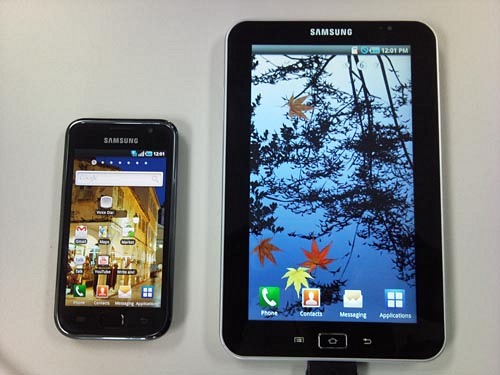 Remember that hot Samsung Galaxy Tab we told you about a few months ago? The one sporting Android? Yeah, that’s the one. It looks like it’s already out in the wild for testing, and it has been spotted in a land down under. That’s right, the TouchWiz packing, Android tablet is already floating about, which tells us that it’s coming very soon for those looking for an iPad alternative.

An “anonymous telco worker” in Australia was seen using the device, and according to that worker, the 7-inch, 3G capable tablet is “awesome.” Electronista says, “When asked, the employee couldn’t provide details, though the very responsive UI supported notions the device is running the same 1GHz ARM processor as the Galaxy S.”

However, previous rumors put the device as being an Android 2.2, or Froyo, tablet that may use a 1.2GHz processor.

With the testing for the Galaxy Tab underway, carriers are likely preparing for the tablet computer’s launch. Vodafone seems to be the likely carrier in Australia and possibly the UK, and according to Electronista Telstra and Optus are also options. In the U.S., there may be a version for the Verizon network, but we’ll have to wait and see on that one.

Would you be interested in the Samsung Galaxy Tab if you haven’t already picked up an Apple iPad? If you’ve been wanting a tablet, but you haven’t gotten an iPad yet, what’s holding you back?