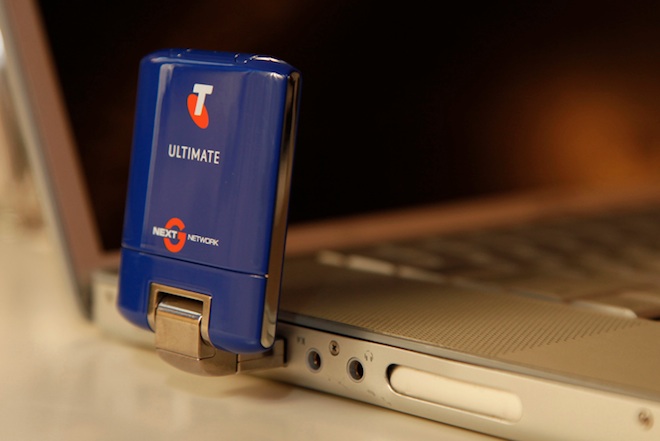 Sierra Wireless has just announced the world’s first dual channel HSPA+ modem, the AirCard 312U. It’s going to be sold in Australia as the “Telstra Ultimate USB modem“, which is just about the most bad ass name you can call a laptop accessory. Telstra, as far as I’m aware, is the only operator in the world to have a fully operational commercial dual channel HSPA+ network. It’s basically a plain “old” HSPA+ network, which currently maxes out at 21 Mbps, but with the ability to use two channels to double the bandwidth to 42 Mbps. Think of the shotgun modem you used in the late 90s to double your download speed, and you understand the basics of how dual channel HSPA+ works.

Now just because it’s shipping in Australia doesn’t mean Americans will be missing out on the fun. T-Mobile USA, who is currently the only nationwide operator to offer an HSPA+ network, albeit to a limited amount of markets, has said that they plan on rolling out dual channel support in 2011. While the Aussies down under get to enjoy mobile broadband, North America is just going to have to wait. In a few months time Verizon and MetroPCS will both have their respective LTE networks turned on anyway and then you guys can all point at Australia on a map and laugh to your heart’s content.

As for Europe, the only operator that has offered concrete guidance on dual channel HSPA+ rollout is Telefónica Spain, who has committed to supplying 42 Mbps of mobile broadband goodness within the next 3 years. Bit of a stretch, but it’s coming.

Favorite quote from the press release: “Customers using a Telstra Ultimate USB modem in enabled coverage areas will experience real-world download speeds up to 20 Mbps.” How nice of them to tell people outright that their 42 Mbps modem will only give them half the speed during actual use. Thumbs up Telstra!

Nokia Siemens Networks, the joint venture between one of Europe's largest mobile technology companies, and one of the world's largest...