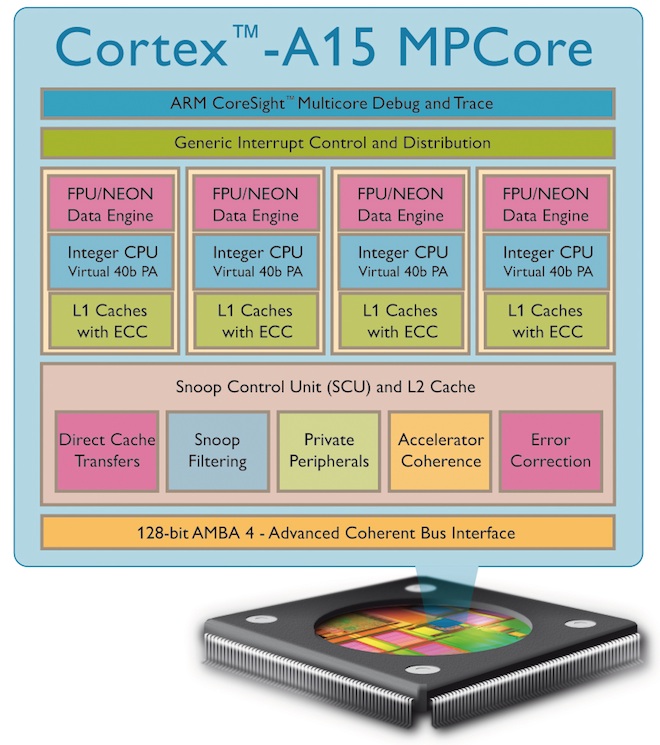 Earlier this year British chip design firm ARM said that a new architecture, code name Eagle, a successor to the Cortex A9, would be unveiled this year and today I’m happy to introduce to you the Cortex A15. Available in configurations that range from a single 1 GHz processor to a quad core 2.5 GHz variant meant for servers, that’s right, servers, ARM’s Cortex A15 takes the yet to ship A9 processor and adds things such as the ability to address more memory, virtualization support, ship with up to 4 MB of L2 cache, and if claims are to be believed, then it’s going to give a 5x factor increase in speed compared to similarly clocked Cortex A8 chips.

Let that sink in for a little. A smartphone shipping with a 1 GHz processor that’s 5x as fast as the 1 GHz device you bought this year, i.e. the Droid 2. Remember the computer industry in the mid 90s, when chips went from 300 MHz to breaking the 1 GHz barrier over the course of half a decade? The same advances are being made in the mobile space right now. The A15 will be available in 32 and 28 nanometer sizes, with 20 nanometer on the roadmap. Texas Instruments was the first to announced a chip based on the A15 last month, but gave no hint as to when it’ll ship. 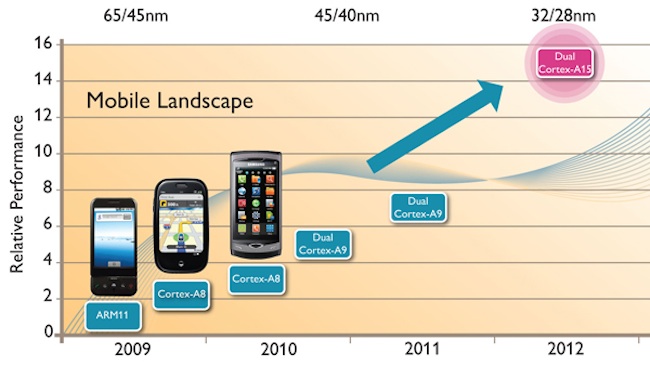 Considering that the A9 has yet to make it into smartphones, and probably isn’t going to until the end of 2011, I wouldn’t hold my breathe for an A15 based chip inside a retail product until at least 2013, if that. More information about the architecture has not been released, but thankfully it’s fully backwards compatible with the ARM v7 architecture of today. Note again that the A15 is the first chip that ARM has specifically said they want to get into servers, which is a direct attack on Intel who powers hundreds, if not thousands, of data centers around the world, serving you your web based email, social network, and streaming video needs.

Update: A blog post by Nandan Nayampally, Director of CPU Product Marketing, notes that the A15 executes 3 instructions per clock unlike the Cortex A8 and A9 that do only 2, and the old ARM 11 processor that’s shipping in midrange devices today that does only 1. He also says that the Cortex A15 can address up to 1 TB of memory, which is bananas when the highest end devices today only ship with 512 MB.

SD cards are ubiquitous and many of you have them inside your mobile phone to either carry your entire music...