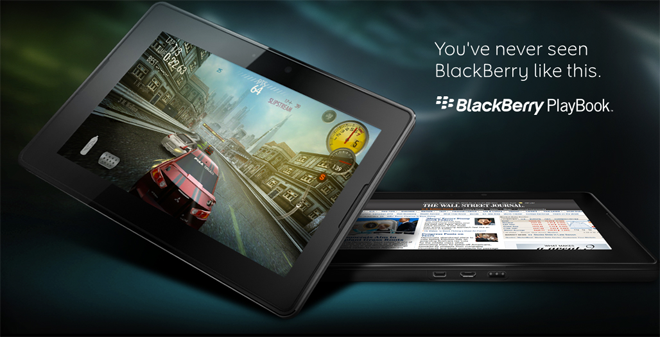 Leveraging its strength in the enterprise market, RIM is marketing it PlayBook as the tablet for the person who lives his or her life in the corporate world. This enterprise focus is in stark contrast to the iPad which is considered as the tablet for the masses and to the Android tablets which are regarded as tablets for the tech-oriented consumer.

RIM has an uphill climb with its PlayBook. The iPad is well-entrenched in the hearts and minds of consumers and businesses alike. Apple has sold well over 3 million iPads here in the US. While many of those iPads have landed in the hands of consumers, a growing number of small and big businesses are ordering Apple’s tablet device in large numbers. Making it even more difficult for RIM, the iPad’s position as a consumer device will only be strengthened this holiday season when the tablet makes its debut in all Best Buy retail stores nationwide.

The PlayBook will also have to compete with the Samsung Galaxy Tab. The Galaxy Tab sports similar specs as the PlayBook and will debut on all four of the major carriers in the US. It is also expected to land in other countries worldwide. The Galaxy Tab features Google’s Android OS, a well-established mobile OS optimized for touchscreen devices. The Galaxy Tab is bolstered by the strength of Samsung’s reputation and the success of its Galaxy S smartphones.

I am big fan of choice and it is exciting to see RIM jump into the tablet market, despite the fierce competition. It is also exciting to see RIM embrace an alternative OS for its tablet device. If you want closer look at the PlayBook, you can check out the brief promotional video below.

Don’t forget to check back soon as we hope to have some hands-on time with this hot, new tablet from RIM.