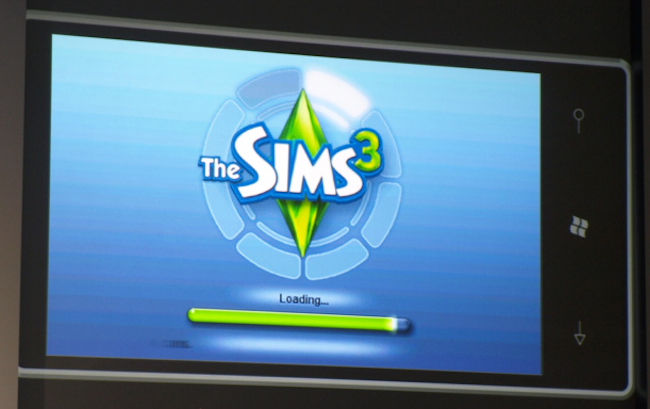 One of the biggest software publishers of the gaming industry announced earlier today at Microsoft’s Windows Phone 7 launch event that they’ll be supporting Windows Phone 7 with four games at its launch on November 7th. During the launch event, The Sims 3 was live demoed for those in attendance, but EA Mobile will also be launching Need for Speed Undercover, Tetris, and Monopoly.

During the Sims 3 demo, Corporate Vice President of Windows Phone Management Joe Belfiore briefly introduced us to his Sim counterpart. No character customization was shown during the demo, instead showing off the living quarters of Joe’s Sim. Joe was able to direct his Sim from the living room into the kitchen, to which he instructed his Sim to perform some maintenance on his refrigerator. Since Joe had not been taking care of his Sim, the Sim wasn’t in a mood to fix his fridge, to which Joe’s Sim folded his arms and shook his head in a disapproving manner.

Each EA Mobile game, as with all games launched on Windows Phone 7, will contain Xbox Live features, such as unlocking achievements, ability to track your friends on the Xbox Live service, as well as the ability to communicate with friends across console, PC, or through a Windows Phone 7 device. Players will also be able to import their current achievements, friends list, and game history to their Windows Phone 7 device if they already have an active Xbox Live gamertag. One thing I’m curious about is how many gamerscore points will each game allow players to unlock as retail titles offer 1000 Gamerscore points, while Xbox Live Arcade titles offer just 200 Gamerscore points.

That’s just the tip of the iceberg as Microsoft has announced there will be 60 games at launch available from such notable mobile publishers as Gameloft, PopCap Games, Konami, Namco, and THQ. Even Microsoft Game Studios, which is a Microsoft owned publishing company, will be throwing their hat into the mobile game publishing ring. With such solid Xbox 360 titles as Halo: Reach, Alan Wake, and Gears of War 2, it should be interesting to see what Microsoft decides to publish on Windows Phone 7.

Hands On with the LG Quantum with Windows Phone 7

Drowning in this barrage of Windows Phone 7 handsets? Here's another for you: the LG Quantum - an AT&T-bound slider...