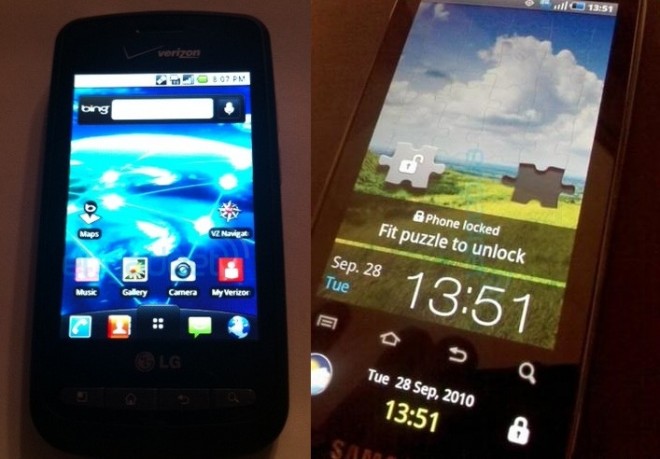 Even if Verizon is prepping an iPhone later next year, it surely isn’t slowing the massive onslaught of Android devices. Rumor has it that the Samsung Continuum and LG Vortex could be on its way as soon as October 29th.

Neither of the handsets will be graced with the Droid name and will both sport Bing as its default search engines. This has stirred up quite a fuss, but as long as a search engine gets you where you want to go, there’s not really a problem, right?

Everyone will have their preference, which is likely Google, but it shouldn’t sway you either way. The Continuum and Vortex both look to be some solid handsets, no matter what search engine these handsets use.

The Samsung Continuum is a Galaxy S device that sports two displays: A main display for most operations and a smaller secondary display that will show you missed calls/texts, as well as RSS feeds. We’re not sure if the handset is running Android 2.1 or 2.2, but only some Galaxy S devices are now getting 2.2, so we wouldn’t be surprised either way.

We’d expect no less than a 1GHz Hummingbird processor and a 5 megapixel camera on the thing since it is a Galaxy S device, but that could change if the carrier wants to differentiate its offerings.

The Vortex will be one of the two new LG Android handsets to hit Verizon, the other being the enV Touch 2, which will also be a global handset. The Vortex is a mid-range device with a 600 MHz processor, Android 2.2 – which is said to run smoothly on the device – and other than that, we know very little of the device. The Vortex will sit nicely next to its QWERTY keyboard-toting cousin, the LG Ally.

If this rumor turns out to be true, we may have quite a significant Android launch on our hands before the end of the year.

Following-up on the public launch of their BlackBerry app, HootSuite has added Facebook functionality to their Android client, which was...