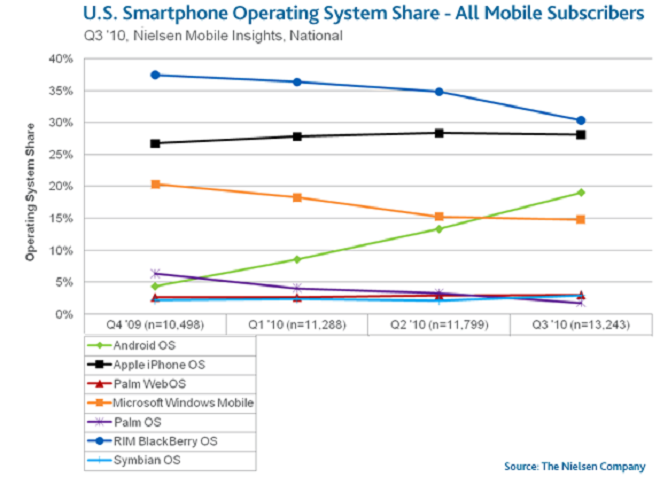 There are some interesting numbers coming out of Nielsen today, as the firm is saying that 28% of U.S. mobile subscribers are now rocking a smartphone.

That means that the vast majority of U.S. cell phone users aren’t on an iPhone or Droid X but are instead using a feature phone or an entry-level device. The trends are definitely in the smartphone’s favor though, as the data also said that 41% of recent acquirers – those who bought a new cell phone in the last six months – purchased a smartphone.

The data also shows that Research In Motion’s BlackBerry OS is the most commonly-used platform with 30% of the market but the Apple iPhone is quickly making up ground. Buoyed by the success of the iPhone 4, Apple nabbed 28% of the U.S. smartphone market.

Android continues to be on a rocket ship to the moon, as it surged to 19% market share. The little, green robot is trending well too, as it was the platform of choice for the majority of people who purchased smartphones within the last six months.

We’ve kind of been guilty in the assumption that everyone has a smartphone but these numbers indicate that there is still plenty of room for growth. I also think these numbers show that market share battles are not predetermined and that could bode well for a host of new players.

Microsoft is about to unleash Windows Phone 7 and there will be multiple handsets for AT&T and T-Mobile. Look for a Sprint version by early next year and the slick-looking platform has a puncher’s chance.

HP and Palm are also trying to jump back in the market but it’s going to take a lot more than the relatively boring Pre 2. Perhaps the upcoming PalmPad will get the general market jazzed up about the webOS platform but let’s hope we see some cool new hardware soon.

It looks like Google Voice may be having some problems making outbound calls but we're not sure how widespread the...