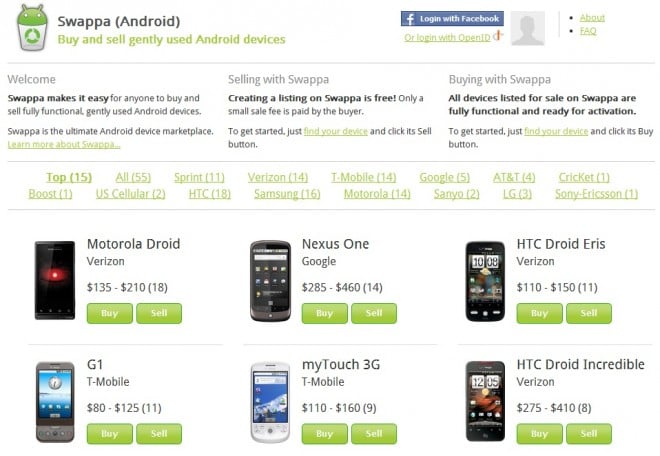 If you’re looking to buy or sell a used Android phone, then Swappa may be just for you. Swappa is a simple and to the point site that allows you to purchase or sell your Android phone without having to go through eBay or Craigslist to do so.

If you’re in the market for a new phone and don’t mind getting a used piece of hardware, then this site is definitely for you. Switching to a new carrier and your old G1 just became useless? Sell it on Swappa to make a quick buck, or two. It should be noted that the site is for lightly used devices, so if it’s survived a scuba diving lesson during the time you’ve owned it, it likely won’t be able to be sold on the site. On the plus side, you can buy and sell rooted Android devices as well.

Swappa is broken into two sections, buy and sell. It really doesn’t get much easier than that, and there are some helpful filters to get exactly where you want to be. However, just like other places one may buy or sell electronics, be weary of the prices. Some devices are being sold for more than the brand new unlocked price, like a Nexus S that’s going for $610 when it’s $529 brand new. Nonetheless, when Swappa gets bigger, it should be the one stop shop for used Android phones, giving  users a quick place to “upgrade” or sell their aging device.

There’re also a few Android tablets listed on the site, but none that are actually available to buy as of yet. It makes sense to add tablets to the site, and we can expect quite a few landing at Swappa when the Xoom and G-Slate hit the market.

Hopefully Swappa will take right off and give users a hefty selection to choose from. Until then, feel free to peruse the existing selection below, which is decently robust as it is.

We just got a little preview of the upcoming Motorola Xoom Super Bowl ad and it continues the theme of...