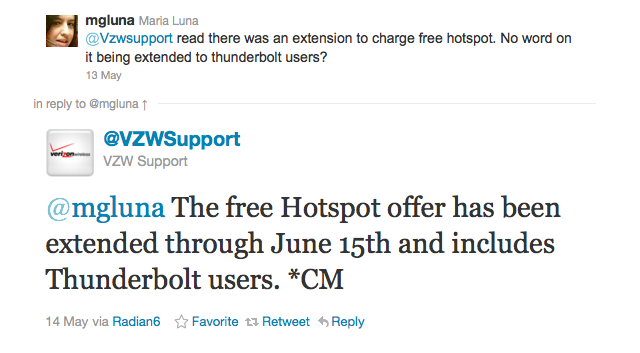 Verizon’s 4G LTE is the hotness right now, but it’s not without issues. It seriously drains battery life and there was an unexpected outage a few weeks ago that left users without the lightning fast network for more than a day. In an effort to keep customers happy, Droid Charge and HTC Thunderbolt users will have free mobile hotspot access until June 15. Not a bad deal.

The Droid Charge and HTC Thunderbolt, two 4G LTE capable devices, can act as mobile hotspots, that is, they can help you connect your laptop, tablet or other wireless device to the Internet via Verizon’s network. This is a feature that usually incurs an additional monthly charge, but again as a courtesy to users, Verizon is keeping it free for the two smartphones until June 15. After that point, I’d imagine that the normal data rates will apply.

The Droid Charge is the latest in the line of Droid smartphones from Verizon, featuring Google’s Android smartphone platform. If you’re interested in picking one up, or learning a bit more, you can read our full review of the device here.

Verizon’s first 4G LTE phone, the HTC Thunderbolt, is a beast of a device. It’s thin and sleek, though hefty and solid, and it runs Android 2.2 Froyo. It’s also capable of blazing data speeds thanks to its LTE radios, though we found that it affected battery life far more significantly than the Droid Charge. If you’re choosing between the two phones, and battery life is important to you, it’s definitely worth considering whether you want the Thunderbolt bad enough to carry spare batteries, or a battery extender. See our full review of the device here.

For those who have few to no issues at all with the devices or Verizon’s network, you’re all very lucky. The nation’s largest LTE network consistently offers cable-broadband-like speeds, and it’s very reliable where available. So enjoy it while it’s free!

It seems like only yesterday that AT&T Android customers were outraged that they were limited to apps available only in...