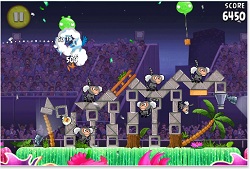 Good news Angry Birds fans, as a new update for Angry Birds Rio is now available for the iPhone and it includes a new bird type and 15 new levels.

If you’re not familiar with Angry Birds Rio, it’s Rovio collaborating with a major movie to build a game out of its juggernaut franchise. The funny thing is that the game could very well go on to generate more revenue than the movie itself, which seemed to have flown through theaters.

Rovio is not just a one-hit wonder, as the company made more than 40 mobile games before it struck it big with Angry Birds Rio. It has now smartly continued to port this game to other platforms including the browser and we’re sure to see more merchandising and TV shows in the near future.

The update is available now in the iTunes store and you can download it here.

What happens to MobileMe customers now that everyone is getting iCloud?

Earlier this week Apple announced a new service called iCloud, an online data storage feature that will allow users to...