Starbucks, in partnership with Apple, will be offering free iPhone apps every week that would otherwise cost users a few bucks. It’s a similar concept to what Starbucks has been doing with getting free music from iTunes, but instead of getting free songs, you’ll be able to walk out of their coffee shops with free apps. Pretty neat, right?

Using the same “Pick of the Week” cards the two companies have been using since April 2008, Starbucks is now using that same system to dole out iPhone applications.

Just like for music, users can find free cards waiting for them at the cash register with codes on the back that can be entered into iTunes or the App Store to get the application.

The funny thing is that for a while, I always used the argument for paid apps, “You’d spend $5 for a latte, why not spend $5 on an app that some developer worked really hard for?” Well, now you get to spend that cash on your latte and the app, too. 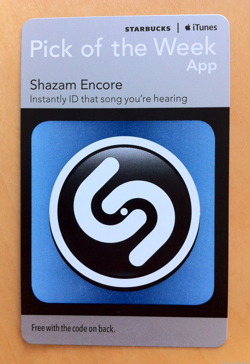 This week, expect to find Shazam Encore, which normally fetches $5.99 in the U.S. iTunes App Store, but this week it’s free at Starbucks when you buy a drink or food item. If you want to pop into your local Starbucks and check it out, let us know how it goes for you! Hopefully the apps are of high caliber as this program continues, as I imagine they would be.