When ShadowGun was revealed back in May, it really impressed us all with its amazing console-like graphics and cover-based shooting mechanics. Mobile games have been gradually improving in terms of their graphics, which is evident in games likes Infinity Blade and RAGE. Madfinger Games’ ShadowGun is yet another game that certainly pushes the graphical envelope on both iOS and Android, but is it just a pretty face or is there a fun game to be had?

ShadowGun has you playing as John Sade who is a mercenary who has been sent to stop the experimental antics of Dr. Edgar Simon, or Dr. Simon for short. You see, Dr. Simon has been experimenting with genetics by creating his own army of mutants, cyborgs, and anything else you can think a mad scientist would produce. Thankfully, John Sade isn’t alone as he has an A.I. guide who helps him make his way through the campaign to take down Dr. Simon. 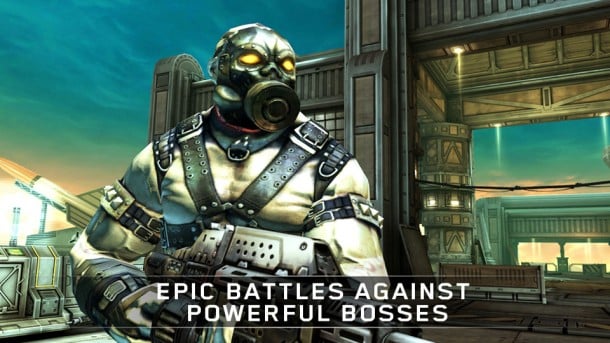 One of ShadowGun’s saving grace is the fact that it’s an impressive looking game built on the Unity Engine. Character models, lighting, special effects and locations all look great across all devices, but I noticed the game looked and performed better on the Samsung Galaxy Tab 10.1. With NVIDIA powering the device with its Tegra 2 processor, it isn’t that much of surprise as they know a thing or two about graphics.

If you’re the kind of person who likes to run around shooting things, you might want to rethink that strategy in ShadowGun as the game has you taking cover and shooting at enemies from behind them during the majority of firefights. You’ll be given a number of guns to take out enemies with, but switching weapons can be a chore as it takes a good 4-5 seconds to switch between them. Did I mention John Sade can’t do anything else while he’s switching weapons? In other words, if you decide to switch to the shotgun in the middle of a firefight, John Sade will be caught with his pants down for those 4-5 seconds, which will most likely result in him dying. It also doesn’t help there are tons of ammo for John’s SMG scattered about while ammo for other weapons are scarce, forcing players to rely on the SMG more than anything. 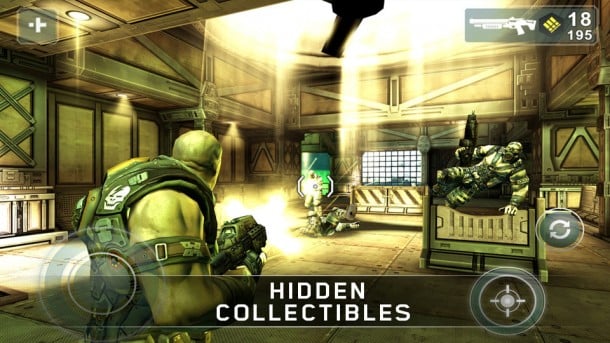 There isn’t much variety in the enemies you’ll face off against in ShadowGun as you’ll fight a large number of cyborgs who immediately run to cover and barely offer any kind of strategy. There will be a sentry bot, larger mutant enemies, or smaller enemies that explode when they come near you, but you’ll be taking on the same enemies throughout a good majority of the game with some bosses sprinkled in.

One of the biggest issues with ShadowGun are simply technical. During my time with the game across multiple devices, the game would crash way too many times for me to ignore. It also doesn’t help there will be a number of moments where the game will chug along and its sound will begin to become choppy, which you can see an example of in the video below. What’s the point of a gaming looking amazing when it can’t perform well enough to be enjoyed by the player?

FINAL THOUGHT: ShadowGun is certainly an ambitious game in terms of what it attempted to deliver. There’s no doubt the game is a feast for the eyes, but its shallow and forgettable storyline, cast, and boring gameplay mechanics make this a game that truly breaks my heart as I want to recommend it to people to see how great mobile games are getting graphically, but graphics can only take a game so far.