It’s pretty obvious that the latest Nexus handset is by far the most popular device to come from the family, as it’s still pretty hard to come by. That, and supply restraints. With the Google Play Store running out of inventory shortly after putting the device up for sale, some may want to look in other places to get the much sought after handset. Luckily, it looks like T-Mobile will be offering up the LG Nexus 4 at all retail locations this month, according to the T-Mobile document you see below.

While we’re not sure about inventory levels per store, T-Mobile offering the Nexus 4 at all locations is definitely something to get excited for if you keep missing out on it. You’ll end up paying more for T-Mobile’s Nexus 4 compared to what the Play Store is offering the device for, but that probably won’t stop many people from grabbing elusive smartphone. Since this is a pentaband device, if you’re willing to cough up the $499 for the handset, you can pop in an AT&T SIM and be on your way. 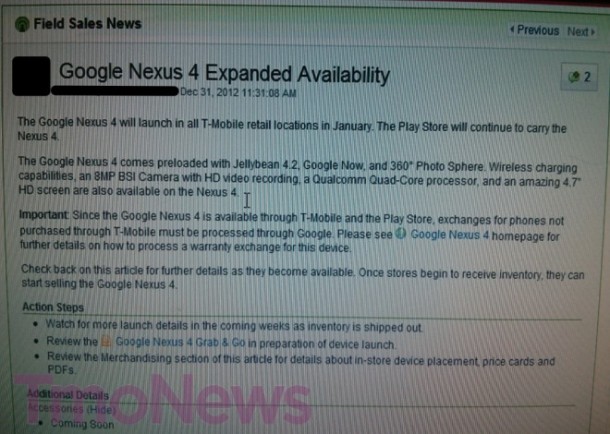 The Nexus 4 is still one of our favorite smartphones of 2012, as it’s already rocking specs of many handsets that are rumored to be announced. The Qualcomm Snapdragon S4 Pro is a quad-core beast that will no doubt find itself in many smartphones this year. The Nexus 4 also has LG’s new Super IPS + display, which is one of the nicest screens we’ve seen ship on a smartphone. Like any Nexus device, the Nexus 4 ships with the latest version of the Android OS, and will be one of the first to receive upcoming updates.

The document also mentions that accessories will be on the way soon, so whether it’s just the bumper case or something else remains to be seen.

While there’s no specified date of the expanded availability, the Nexus 4 will soon be available in just about any T-Mobile store you come across. In reality, if you’re hard up to grab the Nexus 4 now, you can just check eBay now that the prices of the handset have calmed down. You’ll be able to buy one today, around the same price that T-Mobile will be offering the device off-contract, without waiting.

Samsung Galaxy Note 10.1 with all the right LTE bands for Verizon Wireless -- Band 13 as well as Band...