Frog Orbs is an addictive game for iPhone and iPad from Ballpit Monster that revolves around a frog trying to protect his magical orbs and save his flies from enemies. Okay, maybe that sounds weird. It’s a good game though, trust me. I’ve been playing it for almost a week and I’m pretty hooked.

It’s one of those games where you don’t really have to understand the plot (or follow it all) to enjoy the game. You play as the frog with two orbs either side of you and a wand in your hand. When the enemies approach, it’s your job to tap them which will blast and get rid of them. If they get to the orbs without receiving a blast, the power drains. You lose the round if enough make it to the orbs.

For comparison purposes, Frog Orbs feels like the classic arcade game Whack-A-Mole a little bit except the “moles” are animated and moving quickly toward the orbs. According to some reviews I’ve seen, Atari fans think it’s similar to Missile Command as well.

As the game progresses, it gets harder to defeat enemies. More of them appear at once, requiring you to tap at a faster pace. Plus you’ll face newer enemies and unlock more orbs. Each orb, by the way, will help you rid of the enemies more efficiently. Tapping them can blast multiple enemies at once, put up barriers to block them, and more. 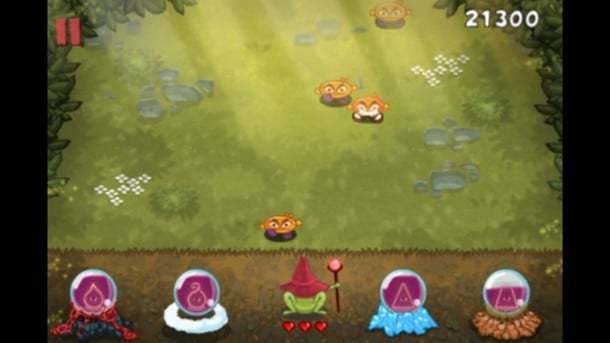 Every so often you’ll also spot flies in the game. Tapping those will save them for later. In a nutshell, flies are the game’s currency. You can buy virtual items like new hats for your frog or additional orbs. If you don’t collect enough flies, you can also buy them via in-app purchase.

It’s worth mentioning that the game also connects to Game Center so you can view leaderboards to compare scores with friends and all that neat-o social stuff.

I don’t really have many complaints about the game because Frog Orbs is one of the most enjoyable games I’ve reviewed to date. However, my one gripe is that it’s not iPhone 5-ready. If you own and iPhone 5 like I do, the black bars do show up to the left and right since the game plays in landscape mode only. That’s a bit disappointing because I like to take advantage of the larger screen as much as possible, plus the iPhone 5 has been out for months so I’m hoping Ballpit Monster gets an update out pronto. If you don’t have an iPhone 5 or if you can withstand the black bars, this won’t be a deal breaker.

I very much like Frog Orbs. It’s fun, it’s addictive, it’s unique, and it’s a great time killer. It’s totally free too so there’s little to no reasons why you shouldn’t at least give it a try. It’s available in the App Store for iPhone and iPad as of February 7th so go download it.

Skype issued a relatively minor update for its iPhone and iPad app today that includes some handy bug fixes as...