At MWC in Barcelona, NVIDIA released some new benchmarks for their Tegra 4 family of processors,which are promising to bring some extreme improvements to the way smartphone and tablet processors function. So far, according to the benchmarks, the Tegra 4 is blowing away the competition. The processors are not on the market yet, but exist in developer kits and designs, and should be available for the market later this year.

As you can tell from the benchmarks below, the Tegra 4 and 4i are running laps around the iPhone A6 processor, and the Snapdragon 600, which is used in the new HTC One. This doesn’t mean that Nvidia won’t be facing some competition however; Samsung has the Exynos 5 Octa in the works, and Qualcomm’s Snapdragon 800 appearing in smartphones and tablets soon. With no benchmarks for the latter two processors yet, we’re not sure at the moment how exactly they will stack up to the Tegra 4 family of processors.

The new processors will provide better performance for just about every aspect of smartphone usage. The Tegra 4 family will boast 72 custom NVIDIA GPU cores, Chimera computational photography architecture, and a NVIDIA i500 LTE modem. Because of its insane performance and array of GPU’s, the Tegra 4 processors will be able to blast HD video and music without using much processing power. The integrated modem technology will make placing calls and using WiFi connections consume less power and enable quicker processing.

We will be seeing the Tegra 4 in NVIDIA’s upcoming Project Shield, and a bevy of devices near the year’s end.

Check out the official white papers here, and the benchmark photos below. 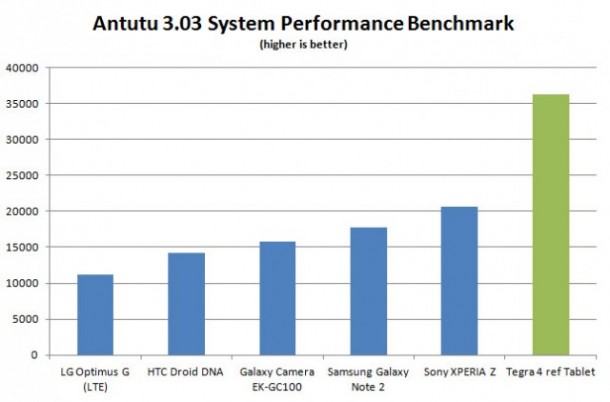 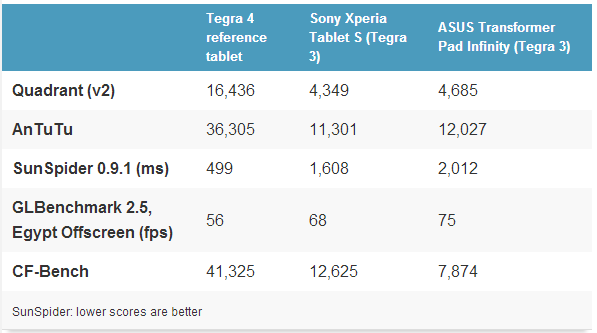