Last week, Niantic Labs introduced the Ingress Report on its YouTube channel. The report covers the world of the “game” Ingress, including player achievements across the world, as well as information pertaining to the ever-unfolding story at NianticProject.com. This week’s report covers a few interesting tidbits.

While only briefly discussed and currently unusable until the next update, the report makes mention of Power Cubes, which recently popped up in the inventory selection menu within the Ingress application. From what we can tell, Power Cubes have a high amount of concentrated Exotic Matter (XM), in which a player/ agent can use to recharge either a specific resonator or portal. Power Cubes are given a level (L4, L5, etc. ) that translate into the amount of XM the in-app item holds and how much it can charge a resonator or portal. It remains to be seen whether or not Power Cubes can only be used on a resonator or portal of the same level.

The obvious benefit of Power Cubes, and this is to assume that their capabilities are indeed described above, is the ability to charge a portal or resonator without using your own XM. 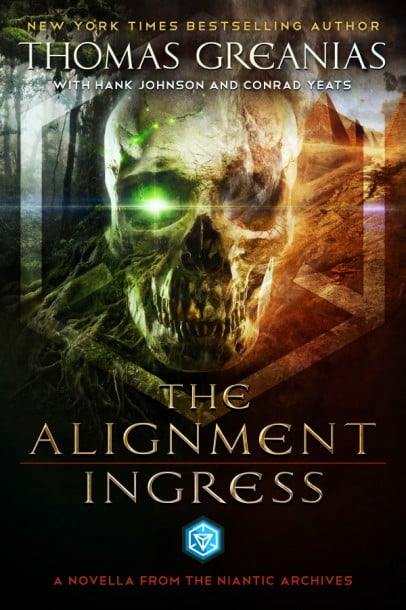 The Alignment: Ingress was recently released, where it was initially believed to be fake. It’s currently available in the Google Play Store and Amazon. If you’re an Ingress agent, The Alignment will allow you to dive in deeper to the world.

From the Google Play Store:

The wait is over for fans of the worldwide bestselling Raising Atlantis novels. Archaeologist Conrad Yeats and Serena Serghetti return for the first time since The Atlantis Revelation in an all-new adventure that introduces adventurer and “exotic matter” tracker Hank Johnson. Their quest takes them to the dark heart of Africa in search of the secret behind King Solomon’s gold. But they unleash the curse of the legendary Queen of Sheba and must stop an ancient evil before it destroys the world.

The Alignment: Ingress is your portal into the larger world of Ingress, the new augmented reality experience from Google’s own Niantic Labs. Now you too, like Hank Johnson, can track exotic matter or XM, join the Enlightened or Resistance factions, and open your own transdimensional portals around the globe–and glimpse what’s on the other side. Visit www.ingress.com to learn how you can experience Ingress for yourself.

While location spoofing is “illegal” in the world of Ingress, no one said anything about attaching a device to a drone and play remotely. An agent (Cenobite) successfully did just this in Austria, and the results are pretty impressive.

There are a few more stories in the Ingress Report, so make sure to catch it below!

If you've yet to see Sony's Xperia Z ad, you should first watch it here before proceeding. It's a powerful...