The “game” Ingress from Niantic Labs @ Google received and update yesterday. No, there’s still no level 9, but the update brings a handful of new tweaks.

Probably the most important new feature in the update is that Power Cubes can now be used. Power Cubes silently debuted a few weeks ago, but players were unable to use them until this update rolled out. Power Cubes can give the player extra Exotic Matter without needing to walk around and gather it. Power Cubes could also be used in other ways, but we’ll have to test them out first to see what they can do. Like anything else, you can receive Power Cubes through hacking a portal.

Check out what it looks like to use a Power Cube here.

New animations can now be found throughout Ingress as well. Likely the most interesting is when a player fires off an XMP Blaster. The animation is now an orange-ish color, which looks much better than the previous implementation. Other, less interesting, but welcomed visual tweaks include a bar that indicates how much XM gained or depleted before the standard  bar catches up on your XM meter. It’s actually not helpful at all, but it’s a nice and subtle piece of visual flair.

Take a look at the screenshots below. 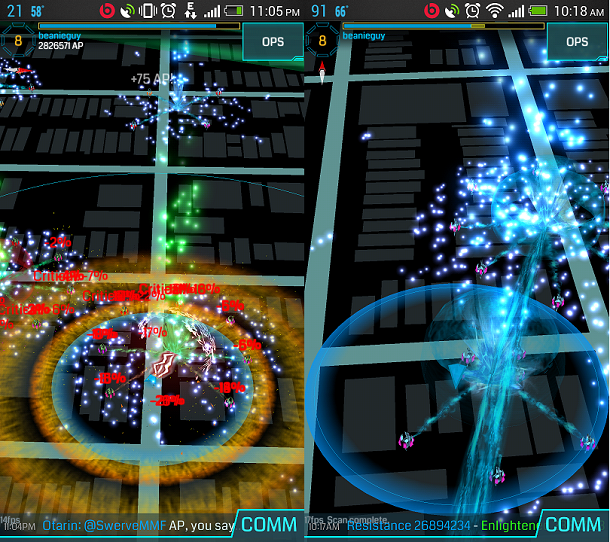 As with any Ingress update, bug fixes are also included. Frankly, we don’t really care what’s fixed. We just know that the gameplay is much better than what it used to be and we’re glad that it’s getting better with each update. With that said, I’ve noticed the app force close on me a few times since updating to 1.23.1.

Be sure to hit up the Google Play Store to update Ingress, agents!

To stay up to date with the world of Ingress, be sure to go to the Niantic Project.com, as well as Decode Ingress. And of course, we’ll be keeping you informed here as well. Stay tuned!

The LG Optimus G Pro could very well be making its way to the U.S. soon, according to Android Central....