Meet Bones Wellington. You’re going to be spending a lot of time with him if you decide to invest in a new game called Mansion Run. He’s essentially a living skeleton living in a nice home, but it’s haunted by ghosts. He needs to make a run from the ghosts by switching through floors and dodging house objects in the way. If he hits three objects, he loses. And by “he” I mean you.

That’s the basic storyline of Underground Pixel’s Mansion Run. It’s a new side-scrolling game for iPhone, iPod touch, and iPad. The object of the game is to just keep running and dodging obstacles to beat your own high score each time. Thanks to Game Center integration, you can compare scores with friends as well. The game is similar in concept to Temple Run, except the player views the action from a different angle and there aren’t as many moves or functions.

Mansion Run’s pixelated design is inspired by the 80s era of video games. For the most part it’s designed pretty well. The menu buttons are a tad on the smaller side but they’re still functional at least for me. I also find it somewhat odd that the menu screen and credits don’t have support for the 4-inch display on newer iOS devices but the game itself does. It’s certainly not a deal breaker since the game does fill up the screen, but it’s a minor nitpick. I’m sure it’ll be addressed in a future update. 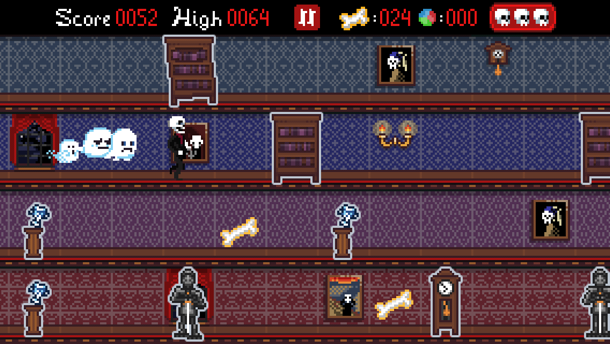 Moving on from design, gameplay is fairly solid. Mansion Run definitely has some addictive properties to it. You’ll want to keep playing to beat your high score each time. There’s four “tracks” you can run on and you swipe up or down to switch between them to dodge furniture when it comes in your path. I very much like how the specific obstacles jiggle around with a clear white border on the paths so you know which furniture exactly to avoid. Collecting bones across the way will enable power-ups like slow-mo, ghost repel, and invincibility, all activated by a swipe to the right.

You’ll also occasionally come across a large obstacle in which case a swipe pattern is presented and you have to complete it accurately to pass. Sometimes there are bonus paths too which will take you either up some stairs to an attic or down a crack into the basement for extra bones.

My one gripe with the game is that the obstacles really start to pile in shortly after the game begins rather than gradually getting more difficult. Sometimes I found myself in situations where it was impossible to get by, too. This can easily be patched in a future update though.

Overall, I think Mansion Run is a pretty fun iOS game and a definite time-killer. It’s unique without being downright weird. The aforementioned small flaws aside that I assume will eventually get patched up, Mansion Run is certainly worth the $0.99. You can buy it for iPhone, iPod touch, and iPad in the App Store today.

One of the biggest news outlets in the country, The Chicago Sun-Times made a bold move yesterday, firing all of...