Looks like T-Mobile has a few presents for us this year. Not only has T-Mobile rolled out Wideband LTE to the greater New York City Area but the magenta company is all set to announce another Un-carrier move tomorrow, December 16th at 10:30AM EST.

“To serve up faster peak network speeds, Wideband LTE increases bandwidth and capacity on T-Mobile’s LTE network. That means more lanes for Un-carrier LTE customers to speed along in. With T-Mobile Wideband LTE, customers can download a full 90-minute HD movie to their phone or tablet in just three and a half minutes or a whole album in just nine seconds with theoretical peak download speeds of 110 Mbps.”

We’re not actually sure what T-Mobile will announce tomorrow but they’re promising bold and big changes. We’ll keep you updated as the Un-carrier news unfolds. T-Mobile’s announcement begins at 10:30AM EST tomorrow, December 16th. 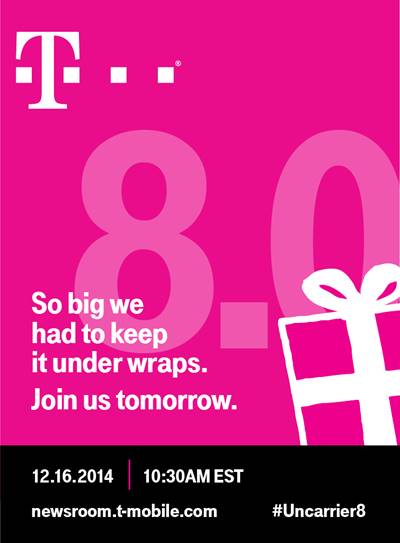 Nexus 9: How to Take a Screenshot

Again we bring you one of those seemingly obvious how-tos, this time explaining how to take a screenshot on the...