While we’ve seen the same device land on AT&T already before, it isn’t any less exciting to see the Samsung Galaxy Note land on T-Mobile. The massive tablet/phone hybrid is every bit the same device that we reviewed a while back, but it now ships with Android 4.0 Ice Cream Sandwich and support for 42Mbps HSPA+. While that sounds all fine and dandy, the rumors of the Note 2 are already ramping up. Should you grab the Note or should you wait? Read on to find out!

The entire face of the device of swallowed by the massive 5.3 inch Super AMOLED HD display with a resolution of 1280 x 800. This is the same display tech we've seen in the Samsung Galaxy Nexus and Galaxy S III, and we have few complaints. Colors are nice and crisp, but as with most displays today on phones today, the Super AMOLED HD panel struggles in direct sunlight. Below the display you'll find a set of the standard Android buttons for Menu, Home, Back, and Search, and above the display is the T-Mobile logo, ear piece, front-facing camera, and a nice helping of sensors.

The top of the Note houses the 3.5 mm headphone jack, along with a noise cancelling microphone for video recording, where you'll find another on the bottom, along with the micro USB charging port, and the slot for the S-Pen. The left and right side of the Galaxy Note houses the volume rocker and power/lock switch. 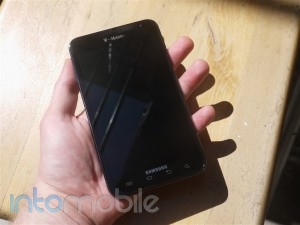 The back side of the Galaxy Note is your standard affair. The battery cover is slightly textured, which is very similar to the T-Mobile Galaxy S II's battery cover - smooth..ish. This is obviously where you'll find the 8 megapixel camera with LED flash that takes some exceptional pictures, along with the speaker grill on the bottom.

Inside the Note, it's a familiar, yet still impressive set up. Powered by a 1.5GHz dual-core processor, the Galaxy Note is anything but slow. Couple that with 1GB of RAM, NFC, and all of the other goodies you'd hope to see in a high-end smartphone today, and you have yourself a winner. 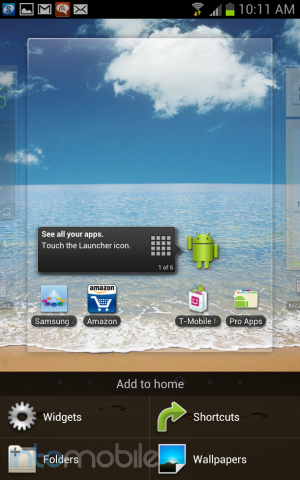 The software experience on the Galaxy Note has been slightly tweaked to be optimized for the S-Pen, but not so much that it's a pain to use with your finger. Samsung carefully thought out the S-Pen experience, and has achieved something great without overtweaking. While you can use the S-Pen just about anywhere within the Note's UI, it's best showcased inside of the new Premium Suite of applications Samsung provided with the Android 4.0 Ice Cream Sandwich update.

Since one of the stand-out features of the Galaxy Note is the S-Pen, you'll be happy to know that it works very well. You'll find a bit of a delay using the pen at time, but it's definitely on point when it comes to accuracy. When Draw Something was a "thing", I used the S-Pen  all the time, in which it performed admirably.

The S-Pen isn't just for play, though. The new Premium Suite of applications Samsung has packaged inside the Ice Cream Sandwich update adds some great productivity features. From shape-matching, text recognition, and math equation solving, there's a lot to get out of the new Suite.

Some of the new changes from the Ice Cream Sandwich update are very simple but provide a nicer experience when it comes to interacting with certain elements of the handset. One such change is the way multitasking is handled. If you've used Ice Cream Sandwich before, this won't be all that new or surprising, but since the majority of Android users are still rocking Gingerbread, even the smallest of tweaks can make for a revelation. To see your most recent applications on the Note, you'll still need to hold down the Home button, but now you'll be presented with the new look of multitasking. Thumbnails of your past apps will populate, showing you exactly where you left off. To dismiss apps, just swipe them away to the left or right. This swiping gesture is found throughout Ice Cream Sandwich, and you can dismiss items in the notification panel the exact same way.

Ice Cream Sandwich spruces up the place in a lot of areas, but some software elements remain the same. One such software element is the way you add widgets, shortcuts, folders, or change your wallpaper. Accessing this menu is easy enough, as you just hold down on an empty space on the home screen. What's remained my least favorite part of this custom UI is adding widgets. For starters, widgets only show up at the bottom of the screen, four at a time. Sure, that doesn't sound so bad, right? Well, out of the box there are 51 widgets to choose from, so once you get yourself situated with a nice helping of applications, we're sure only seeing four widget icons at a time will seem a little less than impressive and require quite a few swipes. This isn't to say that TouchWiz is bad, as it's one of our favorite custom user interfaces for Android. The way a user must add widgets is just an inferior experience to just about any other Android device we've seen in our opinion.

For the most part, the software experience on the Galaxy Note is pretty familiar, save for the newer Ice Cream Sandwich tweaks. Expect to see the same 7 home panels that you can customize to your heart's content, along with a fair amount of T-Mobile bloatware that can be disabled through the settings.

So, the Galaxy Note is finally about to land on T-Mobile after a long time of rumors, and we've got to say that we still like the device a lot. That said, the Note isn't for everyone, as most people don't need a 5.3 inch display in their pockets. Still, the Galaxy Note is great for watching movies on with its big and bright display.

Massive screen and S-Pen aside, the Galaxy Note is still a solid smartphone through and through. With a great camera and fast processor, the phablet can still go toe to toe some of the new smartphones that are coming out today when it comes to specifications. Even with rumors of the Galaxy Note 2 already beginning to fly around, the existing version of the device is fast, powerful, and should keep owners happy.

The Samsung Galaxy Note will become available at T-Mobile on August 8th for $200 on a new two-year contract after a $50 mail-in rebate.