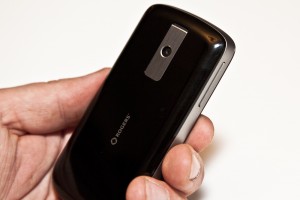 My first impressions after holding the Magic at the Rogers launch event were very good. The device has a good weight, a smooth finish, and a sensible, tight layout. The HVGA capacitive touchscreen is crisp, and generally responsive, depending on what’s running, although I found visibility poor in direct sunlight. The soft keys feel especially good, and are snappy enough for me to think they’re metal. The battery door is tight and smooth, making for a great feel when typing. Overall, solid construction – no complaints whatsoever.

HTC is going for a very simple layout with the Magic, which, on the one hand, looks great, but also hampers functionality. The extUSB plug is one example of trying to unify everything, but only succeeds in irritating the end user. More on that later. The lack of a dedicated camera shutter key is what really hurts the most – half the fun of having a decent camera on your phone is taking spur-of-the-moment shots, the immediacy of which is ruined as soon as you have to unlock your device then find the camera app and wait for it launch. For pictures that will wait for you, that’s fine, but I find my best ones are shot from the hip.