A familiar face on the front of the Magic is the trackball. At first, it seemed a little confusing to have two input styles, but I found the trackball was a great alternative for moving the text cursor precisely as well as picking out web site links buried among a pile of others. (For the record, the web browser on the HTC Magic is superb.) Having to zoom in three or four times to get it by touch is my number one gripes on the iPod Touch’s browser. The worst thing I could say about the trackball is that the sensitivity is awfully low, and having the option to crank it up would be nice. 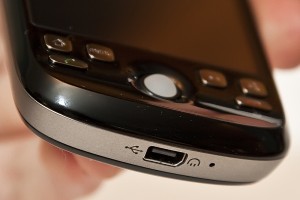 The Magic isn’t what you’d call an exceptional phone when it comes to music. App-wise, it’s cool – I rocked imeem Mobile for awhile, which was great for discovering some new tunes, unfortunately, the extUSB jack really puts the screws to anyone with a nice pair of headphones. HTC’s been pushing this two-in-one music/charging format for awhile and from a practical standpoint, it just doesn’t do it for me. The bundled extUSB headphones are passable, but despite having an in-line microphone and volume wheel, there’s no track control beyond pause/play. I would suggest that it would be more useful to package an adapter, but even that is an awkward compromise to force upon buyers.

Headphones aside, the external speaker was excessively tinny. Again, the BlackBerry Bold’ s buxom four-port speakers have spoiled me. They do the trick in a pinch for hands-free phone calls, but your ears, and those of anyone nearby, will thank you for not cranking out the Van Halen on the external speakers.