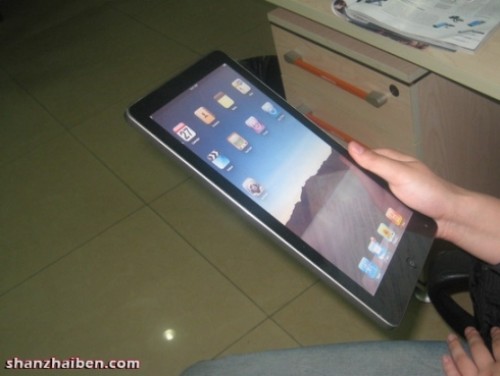 The iPad is coming! So are the clones. While Apple fanboys will say that all tablets are iClones, this seems to be the clone of clones we have on our hands. Running Android, the skin of this tablet is pretty much identical to the iPad OS, from the picture, at least.

The Android tablet is a slightly dumbed down version of the iPad. Instead of having a 1Ghz processor, the clone is running on a 600Mhz processor. The clone also has only 256MB of storage, but will have different version of flash storage, ranging from 1GB to 64GB. The screens also differ on the tablets, where the clone has a widescreen display, where the iPad has a 1024 x 768 pixel screen. Also, since this cloned  tablet is coming from China, we may never be able to get our hands on it. It will initially come in a 7-inch version, and a 10-inch screen option should be available in May.

The iPad will certainly be met with a lot of competition, as tablets were displayed at CES, and CTIA. Most of these tablets are running Android, and much like the smartphone market, could slowly eat away at whatever marketshare that the iPad secures, but I wouldn’t bet on that anytime soon.

I’m still not sold on the whole tablet thing yet. I have a computer that turns into a tablet, but it’s running a full OS, so I see functionality there, less so with the iPad. Sure it will be a great device for entertainment, but it’s not something your going to take instead of your laptop when you really need to get some work done. I actually don’t see much functionality in tablets in general. But with that, if someone is trying to sell me a tablet, show me how it can be a functional replacement. Can I hook it up to my television? Can I video chat on the thing? Will it support flash? These things may not be important to some, but with smartphones today that have some or all of these options coming in the near future, I’d expect these options in a device that is supposed to bridge the gap between smartphones and computers.

If I do end up picking up a tablet this year, it will no doubt be Notion Ink’s Adam. It’s running Android, has a 3.2 megapixel camera that turns 180 degrees, for photography and video chatting, a 10.1 inch dual display that changes from a LCD transmissive full color screen, to a low powered, sunlight-readable, e-paper mode. It also comes with full 1080p HD playback, Flash 10.1 support, a Nvidia Tegra 2 graphics processor, two USB ports, a HDMI port,  and a battery life that would make the iPad cry- 140 hours of audio, and 16 hours of HD video playback. Battery life is questionable, as there are no real world tests, but this tablet will still probably have the best battery life of any tablet in the market when it’s released. So, if you’ve been wishing that the iPad had more functionality, then maybe the Adam is for you. But if you’re looking to have more aesthetic appeal, or your just an Apple fanatic, go iPad.

Either way, the iPad will sell ridiculously well, and will also fuel more manufacturers to get into the tablet business. This is where we all win.

Google Maps Navigation already offers it, as does Nokia's Ovi Maps, and now MapQuest is getting into the free turn-by-turn,...