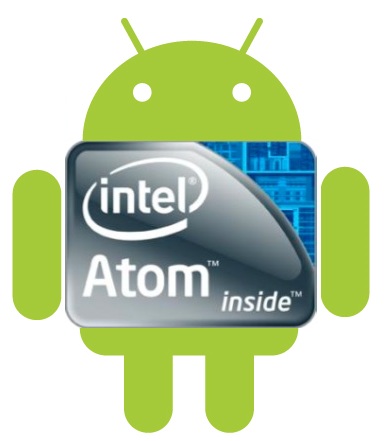 Intel’s Atom is a low-powered microprocessor that is predominantly found in netbooks today. Intel is looking to expand the use of the processor into tablets and smartphones. Recently, Intel has ported Android running off it’s Atom processor, signaling that an Android/Atom phone may not be too far off for consumers.

Android was made with ARM processors in mind. Now with Snapdragon, and Apple’s A4 chip, customers are expecting these speeds in smartphones from now on. I know I am, and I don’t think I’d even fathom going back to anything lower than 1GHz. The Snapdragon family should be expanded with processors running at 1.3Ghz and 1.5 Ghz later this year. But with the Atom already found in certain products, it may be somewhat easier for Intel to get them out, as long as the software supports it.

Intel intends to do just that. The chipmaker has successfully ported Google’s mobile OS to be used with their Atom. This would currently be the fastest processor running on a mobile phone to date. Surely, competition will catch up, but if Intel has already succeeded, others may be behind for a while.

It doesn’t stop with Android, either. “Intel is enabling all OSes for Atom phones.” says Renee James, Intel’s general manager for software and services group. That means we could soon see a multitude of platforms supporting the Atom. With it’s open-sourced nature, Android would clearly be the first place to start. Plus, with Android being the hottest mobile platform around these days, Intel sure doesn’t want to miss out on its growth.

You should know that this is not the first time that the little green robot OS has been ported over to an Atom processor. Acer released a netbook that dual-booted Windows XP with Android, the AOD250-1613. While that may have been an interesting endeavor, it looked like there were minimal modifications done to the Android system, making it quite useless. Android will do best on smartphones and tablets, since they are both touchscreen devices. Given that the Android experience on a netbook could indeed improve, I think its probably safe to say that not many people will be buying a netbook with the little green robot OS for its functionality.

Hopefully some more light will shed upon the progress of Intel’s Android/Atom venture, we’ll be sure to keep you updated on this one.

Those of you sniffing around for Android 2.1 for the Cliq, or international folks looking for a Milestone update since...