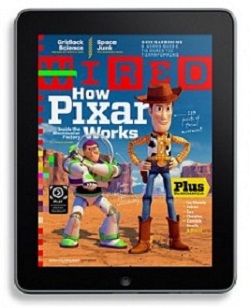 When the Apple iPad was first introduced, many publishers thought this would be the next step or potential savior for magazines and newspapers but reports suggest that these apps are floundering without a clear subscription strategy.

According to WWD, the Wired iPad app had a wildly successful debut with about 100,000 downloads but the recent figures peg its downloads around the 22,000 mark. That’s still pretty good considering users have to seek out each new issue and pay about $4 for it.

The Wired crowd would also seem predisposed toward iPad magazines – as it’s generally a tech-savvy crowd – but other magazines aren’t faring as well. The Vanity Fair iPad magazine dipped to 8,700 digital issues for November, down from 10,500 in August. The Glamour iPad magazine has dropped about 40% since September.

To be fair, we haven’t heard the stats of other publications like the New Yorker, Esquire or People. The custom-made Project magazine has also been creating some waves and we don’t know how well it was received.

Still, it’s pretty clear that magazines and publications need to have some form of subscription service in order to fully utilize this tablet form factor. Luckily, that may not be too far away.

Apple iOS 4.3 is supposed to bring a full subscription service which will enable users to sign up for publications and not have to worry about downloading each new issue. While I’m sure there will be safeguards to make sure you’re not being gouged by suspect apps, this does seem like a great way to help users experience more magazine apps.

This subscription service is supposed to launch with a custom-made newspaper from Rupert Murdoch which is supposed to be called The Daily. This will be a once-a-day newspaper that will cost 99 cents a week. It will be an interesting experiment to see how well this is received.