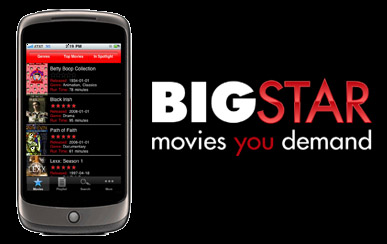 BIGSTAR launched “Movies You Demand” Android application that is designed to stream movies from BIGSTAR’s library to Android-powered devices.

Users can browse titles in the BIGSTAR library by genre, rating and a spotlight, with new hard-to-get, independent, foreign and documentary movies being added on a daily basis. In other words, BIGSTAR’s app is made for folks who want to “go beyond Hollywood” while on the go.

Available as a free download, BIGSTAR for Android comes with a 30-day free trial service, after which [30 days] users are invited to sign-up for $4.99 a month membership…

Commenting on the app launch, BIGSTAR’s CTO Erik Marum said: “We’re expecting a strong response to ‘Movies You Demand’ from Android users. Extending our support to Android devices will make it easy and simple for audiences everywhere to watch movies on the go. Plus, our movies play back on almost all Android variants, including early devices, such as the T-Mobile G1 or budget Android phones with slower processors.”

SPB Software is bringing its SPB TV application to the Maemo platform - i.e. Nokia N900. I'm not sure I...