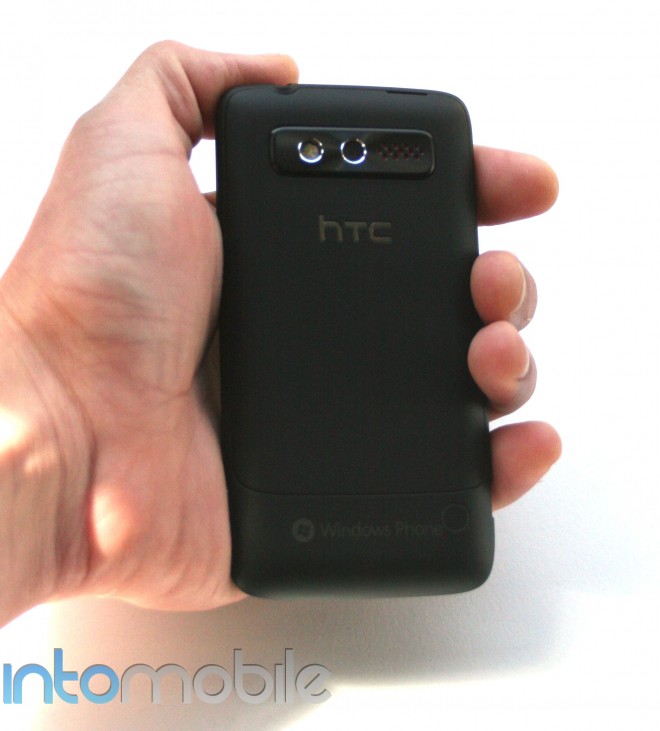 When Microsoft announced the first line of Windows Phones, many were a little peeved that there would be no CDMA availability out of the gate. We’ve since seen the Arrive for Sprint but nothing has graced Verizon’s shelves until now. In this review of the first Windows Phone for the carrier, we’ll see if the simple and sleek HTC Trophy may be worth the way for the patient customers out there. But is this handset a truly unique or is HTC re-tooling some of its past Android handsets for Windows Phone? Read on to find out! 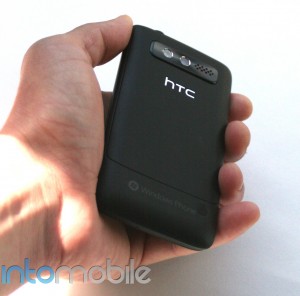 The HTC Trophy looks very much like a phone that was designed for Verizon but tt also looks like a phone we’ve seen from HTC before. The design is very simple, almost to the point that it may look boring to some. That said, it’s very simple design will appeal to many and since Windows Phone praises the simple, it only make sense for the physical design to reflect the same.

The face of the device is very clean and is encompassed with a thin, silver trim. The screen, Verizon’s logo, and the three Windows Phone capacitive buttons (back, home, and search) are found here and little else. Everything outside of the trim is a matte black with the exception of the camera, and ports. The Trophy has a unique speaker grill that’s basically perforated into the handset. It may look a bit ugly to some but we like to look of it.

The top of the Trophy houses only the power/lock button and the 3.5 mm headphone jack. The dedicated camera button finds itself on the right spine of the device, and the volume rock and charging port on the left spine. The rear of the device is nice and clean and orderly with the camera, HTC logo and Windows Phone logo all centralized and streamlined. The only thing that takes away from this is the small circle to the right of the Windows Phone logo, which is likely for the phone’s antenna.

The camera itself is on another piece of material that’s raised from the rest of the back. The layout is simple, showing the LED flash, the lens, and the speaker grill all in a row. The speaker grill’s background is red and when you decide to pop off the back using the tab at the top, the back is hiding a very red inside.

The Trophy sports a nice spec-sheet but it may not have enough umph for the spec-junkies of the world. The single-core Qualcomm processor is nonetheless snappy and will easily be able to take on the tasks you throw at it. The 576 MB of RAM doesn’t hurt, either. 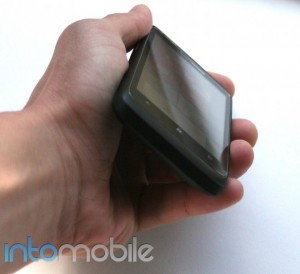 The phone feels great in the hand and is much lighter than you’d expect. The lightness can also give you the notion that the handset is cheaply made. While the Trophy does feel a bit fragile, HTC is known for great build quality and we think the handset could endure a beating.

The 3.8 inch display fits in the hand perfectly without feeling too small or too big, even though we think 4 inches is the sweet spot. The red hiding behind the backplate may remind us of some Android phones we’ve seen before, but the addition of this is all HTC. The handset-maker has an eye for detail and delivers in many ways. So if you think the Trophy is lacking in the flare department, pop off that battery door.

Known for edgy designs, HTC has seriously refined the Trophy, yet there’s still little doubt as to who made this handset. Even without the logo, the Trophy screams HTC.

Overall, the Trophy is a solidly built handset and probably one of the best looking Windows Phones we’ve ever laid eyes on. 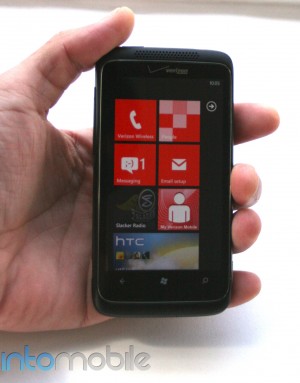 Shipping with the NoDo update, the Trophy has the latest version of the Windows Phone 7 operating system and it brings a couple of new features to the table. While the update everyone is interested in is Mango, it won’t be hitting handsets for months, so you’ll have to make do with NoDo.

Windows Phone 7 is one of the slickest operating systems around that makes Android look like a huge mess and iOS look ancient. That said, Microsoft’s mobile operating system, while much better than Windows Mobile, trails Android and iOS in handfuls of ways. The OS is still going through the growing pains of a new platform and should be quite the contender by year’s end.

Windows Phone 7 features “live tiles” that will show you relevant information about your phone without having to open the application. This information is limited, however, and most of the time you’ll have to go into the application to get the information you actually want. Still, this is a novel approach to how one navigates through an OS. Live tiles are similar to Android’s widgets but widgets on Android can be customized much more, ensuring the information you want is at a glance. That said, most of the time there’s enough information shown on the live tile. Still, something as simple as seeing who the message or missed call was from would be nice.

Pre-installed Windows Phone 7 applications are really a joy to use. Applications have an infinite looping feature that will allow you to go back to the first panel just by swiping and all have the same look and feel as the rest of the OS. Featuring tight integration with Xbox Live and Zune, Windows Phone 7 is the go-to OS for those who use these services frequently, with no other competitor coming close.

NoDo comes with welcomed features like copy and paste, application state saving (app freezing for “multitasking”), and a handful of enhancements throughout the OS. While competing operating systems already have most of the features that NoDo brings to Windows Phone 7 in place, Microsoft has put a lot of detail into its OS and makes the experience that much more enjoyable.

As a primary Android user going to Windows Phone 7, the OS seems somewhat limited. It is in some respects, but one just needs to find out how WP7 does things opposed to other operating systems out there, obviously. Still, it’s going to take Microsoft a while to bring the fight against Android and iOS, even if it looks better than both.

Windows Phone 7 features Internet Explorer, which comes to no surprise. As with the rest of the operating system, the web browser is very simple, gets the job done, but ultimately leaves a lot to be desired.

All of your options are laid out in front of you when you open the browser, with a quick settings menu at the bottom. You’re given the option to add a bookmark, view bookmarks, and see the open windows at the bottom. To the right of these options lie three dots that will reveal more options to share the page, find something on the page, pin to your homescreen, or the real settings menu.

With no flash support at the moment, nothing really beats the Android browser today but Windows Phone 7 will eventually support Flash in the future. The web browser works well, but small things like not being able to access the address bar in landscape are small peeves that we wish would be addressed. Still, the web browser is more than capable and does its job with the elegance you’d expect from the OS. 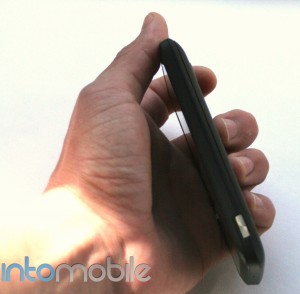 Since this is Windows Phone 7, you can expect a great media experience through Zune. Just like the rest of the OS, the look and feel of the music player is streamlined, simple, and sexy. You’ll have to manually sync the handset through a computer, but it requires little to no effort. You can sync all of your music, videos, and podcasts to the phone, as well as listen to the radio (with headphones plugged in) and purchase music from the Marketplace. Slacker Radio is also pre-installed and you can listen right from the music application.

The Trophy comes with a 5-megapixel camera with LED flash and is capable of recording 720p HD video.

The camera software is simple and to the point, and offers up a couple of options for you to play around with. The standard photo effects like grey scale, sepia, and negative are all present, and you can also adjust the scene that best suits the environment.

Taking pictures is simple enough and after you snap a photo it slides to the left for easy access. However, when you go to look at your pictures a pop-up will ask you if you want to automatically share your photos online. You can disable it, but we wish that the option would be tucked away in the settings somewhere and not in your face.

When we reviewed the HTC Arrive for Sprint, we were pretty surprised to see how poor the camera quality was and we’re happy to say that the Trophy takes much better shots. Unfortunately, video capture suffered quite a bit. 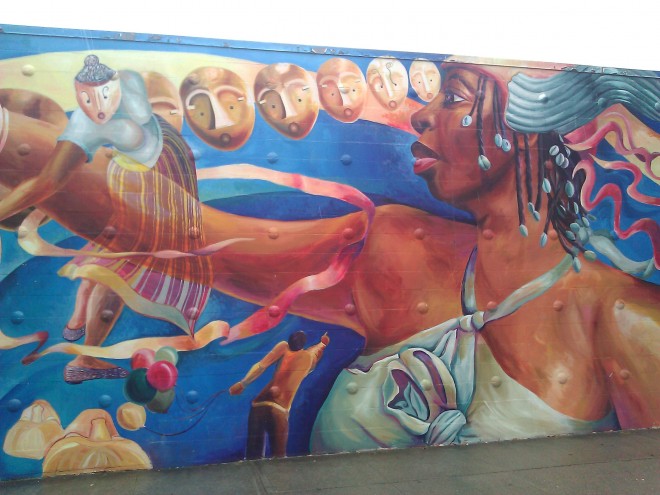 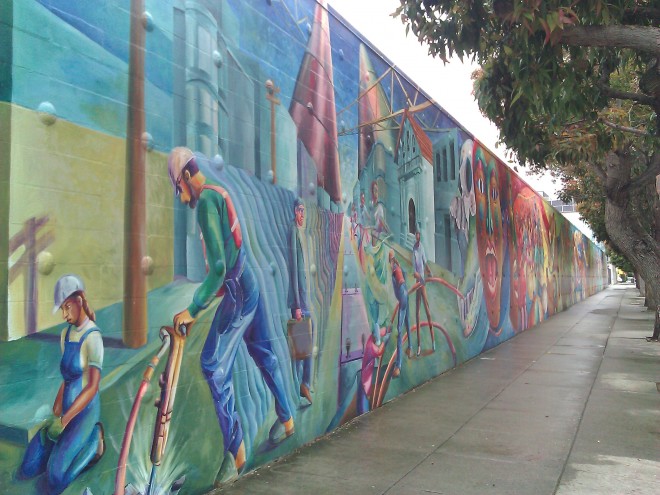 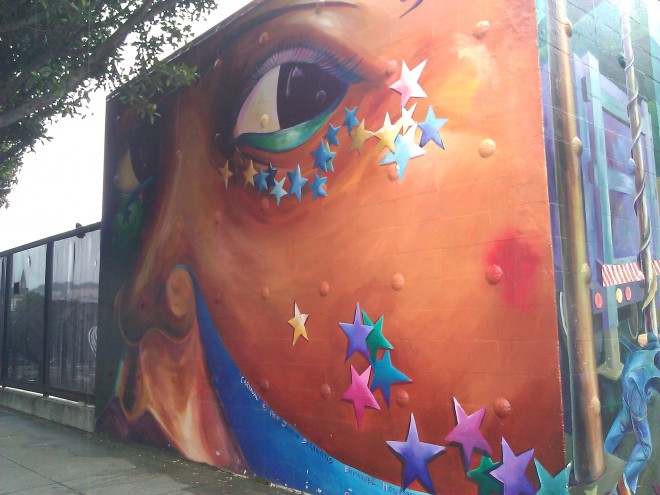 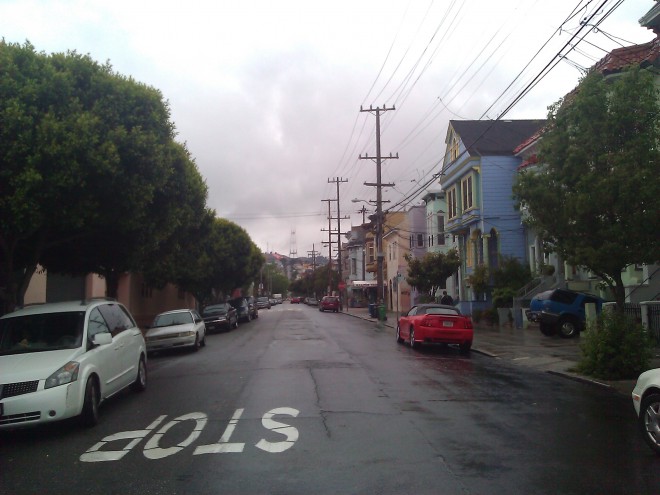 Call quality on the Trophy is on par with most Verizon phones today and it provides a solid experience on both sides of the conversation. The back speaker on the handset also delivers a loud call without much distortion or background noise.

The Trophy can easily last a full day with moderate use but the data junkies out there may want to bring the charger, just to be safe. This isn’t for the Trophy itself, but any smartphone. If you’re streaming a lot of video, listening to music, and surfing the web, expect a significant battery loss. Luckily, the Trophy delivers pretty well with battery life, even with a good amount of use.

Is this a gold Trophy?

Verizon’s first Windows Phone is a solid device that delivers on many fronts. However, the handset may sell to those who are looking for a Windows Phone, not those looking for a feature-packed handset. The most advanced handsets on the carrier run Android and tout dual-core processors or 4G LTE. In that respect, you’re not going to find the best phone running Windows Phone 7 on Verizon.

This sleek phone packs a powerful punch without knocking a hole in your wallet and that alone may make some consider the Trophy. Then again, there are many new WP7 handsets on the way, so if the Trophy doesn’t do it for you, just wait a couple of months.

If you’re looking for a Windows Phone on Verizon, the Trophy is your only option right now. Fortunately, it’s a darn good phone that’s sure to please.

Microsoft to have strict hardware specs for Windows tablets

We are expecting Microsoft to show off its version of Windows for tablets and the company will reportedly be putting...